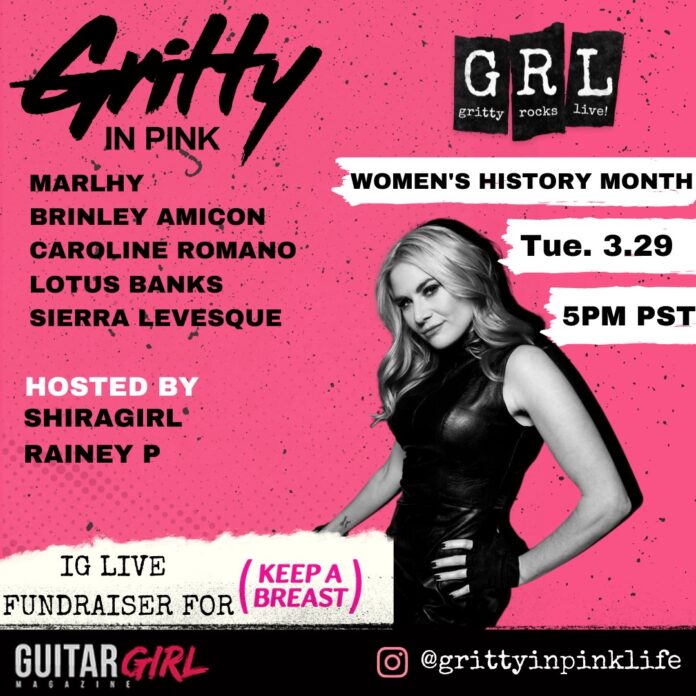 Shiragirl opened the show with co-host, Rainey P (Shiragirl), and welcomed Keep A
Breast Founder Shaney Jo to the show to discuss the Keep A Breast mission. Surprise
special guest VK Lynne (The Spider Accomplice) joined the show and performed a
Gritty version of “Come to My Window” by the legendary Melissa Etheridge, who has
recently been announced as Gritty In Pink’s Strategic Advisor for their new marketplace
INPINK, which is connected industry pros with a community of diverse female creators.

After the opening performance, 19-year-old multi-instrumentalist Marlhy joined the
show with an acoustic performance of her song “Cinema.” After getting the crowd
moving with the melodic set, she talked about the meaning behind the song,” I think
everyone deserves to find that cinema type of romance.” LA-based guitarist Brinley
Amicon spoke about her upcoming hard-rock/ blues project Vonan, which is expected
to release this Summer.

Up-and-coming singer-songwriter Caroline Romano performed her guitar-assisted
song “Panic Attack”, and talked about her new album Oddities & Prodigies, “It’s about
being young and being terrible at being young.” DJ Lotus Banks spoke about debuting
in West Hollywood, hiring a DJ coach to perfect her craft, and adapting to different
styles as a DJ. “The advice I got [from my mentor and coach] is to just be open and
remain open – especially when it comes to networking and booking gigs. I just got
booked for a Latin night at a club in San Diego…and I don’t even specialize in Latin
music, but hey, I can do it.” Rock singer Sierra Levesque ended the evening with her
new stand-up anthem, “Authority,” and discussed working on her upcoming debut
single.