Home News Music News GRITTY IN PINK’S VIRTUAL TOUR HEADS TO NASHVILLE, AFTER BLOWING THROUGH THE... 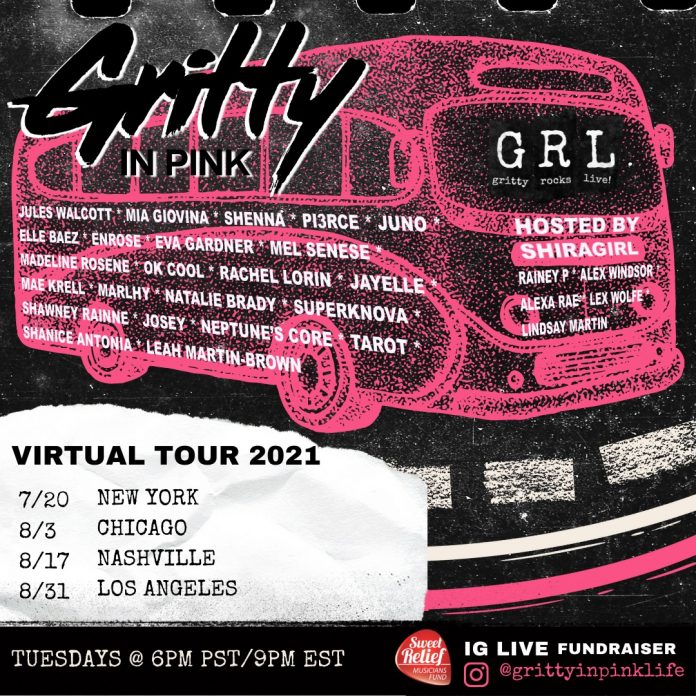 On August 3, Gritty In Pink continued their four-city virtual excursion in Chicago, which is now available to watch on their IGTV. Shiragirl and guests Alex Nicole Windsor and Lindsay Martin opened the show with a cover of “Seether“ by Chicago’s very own Veruca Salt. Tatiana Clay from Sweet Relief joined the show and discussed their mission to help struggling music professionals: “We’re still accepting applications for grants, we have thousands of applicants still waiting on grants. These grants go towards rent, food, clothes, and any vital living expenses that they need. Especially with the threat of the industry possibly shutting down again…the need is still great.” If you are interested in supporting the Sweet Relief Musicians Fund, you can text GRITTY to 2028581233 for more information or go to www.sweetrelief.org to purchase merchandise. All proceeds from the purchase will go towards grants to support those in need. Viewers who donated during the Livestream were entered into a giveaway for a chance to win a pack of Owl’s Brew Boozy Tea.

Pop Star SuperKnova joined the show to talk about getting back into live shows, and her new music video for her latest single Goals. “I realized I was trying to live out other people’s expectations of me, and I don’t have to.” Mel Senese talked about her upcoming music video for her single Merry-go-round which releases August 5, and performed her empowering guitar assisted song Untouchable. Chicago-duo OK Cool performed their single Five Finger Exploding Heart Beat Technique off their latest EP “Surrealist”; the record was inspired by Kill Bill Vol. 2. Newcomers Neptune’s Core ended the livestream with an acoustic performance of their new single Turning Red and discussed starting their music journey at young ages.

Next up is Nashville, aka Music City which is sure to make noise. Gritty In Pink will wrap up their summer virtual tour in Los Angeles on Tuesday, August 31 at 6 PM PT/9 PM ET. For more updates about future Gritty shows, follow Gritty In Pink on Instagram.