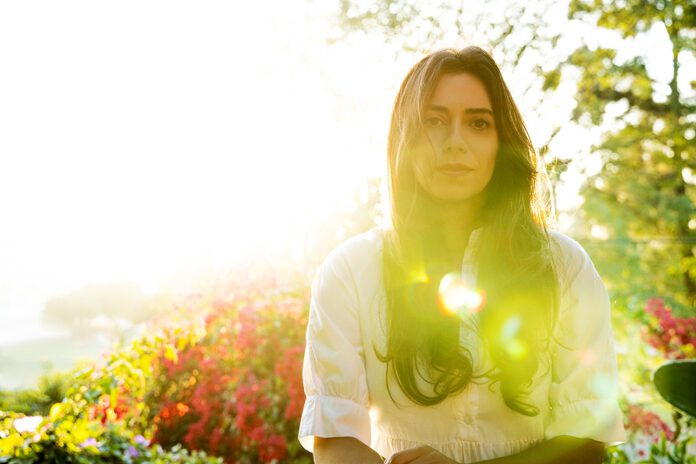 NEW YORK – Feb. 25, 2022 – Haroula Rose sings like she’s telling a secret, a style the Los Angeles-based singer-songwriter can perhaps owe to the many years she spent shyly composing and playing her haunting melodies alone in her native Chicago. The next single from Catch the Light (June 17), “Spades,” is out today, which looks closely at lingering memories, examining how nostalgia can tinge our viewpoints over time.

With Catch the Light, Rose’s third album and first to co-produce, she has deepened and complicated her dreamy, tender repertoire. “Time’s Fool,” the album’s first single, is out now, featuring Molly Parden on harmonies and callbacks, Omar Velasco on the second guitar, and the inimitable Greg Leisz on pedal steel.

The nine songs on Catch the Light are full of loving and longing, evocative confessions that document the shadow of sorrow that roots beneath every joy. The title song, written in an inspired twenty-minute rush, is a study in “how we’re all enraptured by darkness and light,” and how contrasts give our lives meaning. The title is also a cinematographic reference to Rose’s work as a filmmaker. Since her last album, she’s released her debut feature as a writer and director, the highly acclaimed “Once Upon a River,” which was celebrated as one of 2020’s most anticipated films by TIME and Filmmaker magazines, winning 19 awards at 40 festivals worldwide. The “Once Upon a River” soundtrack was a collaboration between Rose and acclaimed artists such as Rodney Crowell, Will Oldham, JD Souther, and Peter Bradley Adams, with a score by Zac Rae.

“Catch the Light has to do with various pieces of my life coming together in a very personal, naked way,” Rose says. “I wanted to make a record that was sparse — just guitars, pianos and vocals, basically. I consider this album as a reflection of going inward, and sharing parts of my life in that way. The metaphor for the title, Catch the Light, has both to do with cinema — as well as seeing the light inside of us that illuminates in darkness.”

The seven originals and two covers on Catch the Light feature a wide cast of musicians who helped create the sweeping, spacious arrangements with minimal elements. These collaborations, especially in the era of social distance, were especially critical to the album’s intimate appeal. Ben Davis and Will Graefe contributed vocals and guitar on two songs they co-wrote with Rose —”Happenstance,” and “The Nature of Things.” Joachim Cooder plays percussion and cajón on Luchín; Greg Liesz plays pedal steel and Omar Velasco plays guitar on two songs each.

Rose’s fans will likely recognize the imprint of June Tabor, Joni Mitchell, Judee Sill, and Bonnie “Prince” Billy, but the lesser-known but hugely influential Víctor Jara, the Chilean artist and activist who was assassinated in 1973, was an important guide in this highly internal, novelistic album. Rose covered Jara’s song “Luchín,” about a child living in a cruel world who finds solace in his inner life, after finding its themes to resonate with the political and social upheavals of 2020. The other cover on the album, Chris Stapleton’s country-rock hit “You Should Probably Leave” is sung as a piano ballad showcasing what Rose does best — finding new layers of poignancy in familiar places.

“I found that because we went inward so much these last two years, that the introspection really shone a light on things we have yet to fully process and discover about ourselves collectively as well as individually,” Rose says. “And I think it’s been valuable, if painful, for me to see so much heartbreak and so many things falling apart whilst others came together or got stronger.”