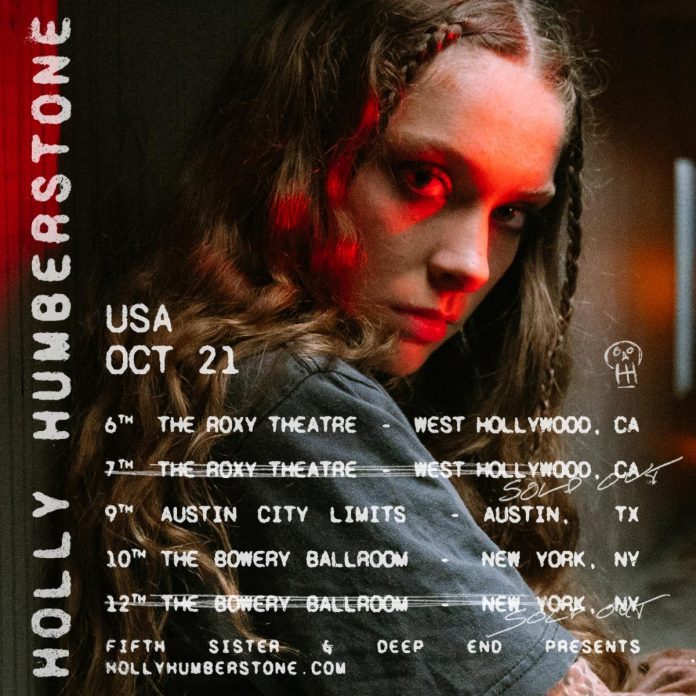 September 1, 2021 – Breakout singer-songwriter Holly Humberstone SOLD OUT her first-ever US headlining shows in under three minutes. Kicking off in October in support of her forthcoming EP The Walls Are Way Too Thin, Holly has announced today that she has added second dates at The Roxy Theatre in Los Angeles on October 6th and The Bowery Ballroom in New York City on October 10th due to popular demand. Pre-sale tickets are available beginning tomorrow, September 2nd at 10 AM local time and general on-sale begins Friday, September 3rd at 10 AM local time. Please see below for dates and visit Holly’s website here for ticketing information.

To celebrate the announcement, Holly has also unveiled a brand new tunnel version of her latest single “Please Don’t Leave Just Yet,” co-written and co-produced by The 1975’s Matty Healy. The haunting rendition showcases her live brilliance as she delivers an intimate vocal performance while seamlessly floating between multiple instruments. Watch now HERE.

When Holly Humberstone entered the studio to record “Please Don’t Leave Just Yet” with Matty Healy, frontman of one of Holly’s favorite bands, The 1975, it was mid-pandemic and the 21-year-old felt a yearning for human connection. During a year where people longed for company, Holly, Matty, and longtime collaborator Rob Milton, created a song that conveys the despair people feel in the minutes leading up to someone’s departure. Even if it’s time to part ways, holding on for just a few seconds longer delays the pain that you know is right around the corner. Holly’s ability to communicate that amount of vulnerability among the distortion of the track is a testament to her storytelling abilities. Listen to “Please Don’t Leave Just Yet” here.

Set to be released on November 5th, 2021 via Darkroom / Interscope / Polydor Records, The Walls Are Way Too Thin represents a turning point for the rising talent. Featuring songs such as “Please Don’t Leave Just Yet,” as well as the incredibly emotive first single “Haunted House” and title track “The Walls Are Way Too Thin,” her sophomore effort is a departure from the crumbling childhood home that has been at the forefront of her creative identity to-date, and an emergence into the heartbreak that can accompany all facets of adulthood. Pre-save the EP here.

The Walls Are Way Too Thin follows Holly’s critically acclaimed debut Falling Asleep At The Wheel, which marked the first chapter in the story of a new global talent who’s garnered over 150M global streams to-date. Having just been announced as the Ivor Novello Rising Star Nominee, to being named the BBC Sound of 2021, Apple’s Up Next Artist, VEVO DSCVR’s Artists To Watch 2021, and internationally heralded by the likes of Jimmy Kimmel, James Corden, Triple J, The Sunday Times, NME (5*), Pitchfork, The Guardian, i-D, ELLE, and Billboard, it is Holly’s remarkable storytelling that has captured the hearts and minds of fans globally. Holly wants her lyrics to be the ones people could tattoo on themselves and her songs embrace and translate some of life’s most intense feelings in a way that typical conversations all too often fail to capture, from mental health struggles to the dizzying feelings of displacement as you grow out of adolescence.