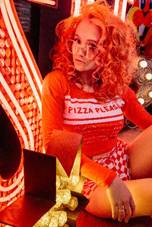 10 years on from her X Factor debut, Janet Devlin is revisiting the song that started her career. In this sultry cover of Elton John’s ‘Your Song’, released 19th November, the singer-songwriter’s distinctive voice is as moving as it was a decade ago, demonstrating her skill in renewing songs through her own unique style. Her transformative covers have even garnered the attention of Ed Sheeran, Russell Crowe and Ryan Reynolds on Twitter in recent weeks. ‘Your Song’ is from Janet’s forthcoming EP ‘It’s Not That Deep’, out in December.

Fans have anticipated the release of ‘Your Song’ as a single since Janet’s debut, as she explains: “I’ve had 10 years of inbox messages requesting me to release this cover. I never quite imagined that a song could follow me throughout my career but this one has – in the best way possible. As far as songs to be known for, I’m glad it’s this one. I think I’ll rename it ‘My Song’ haha!” Undeniably an iconic song, Janet highlights why it means so much to her: “What I love the most is where the song took me and still takes me mentally – I’m automatically transported to a happy place when I sing it. Which is hard for me as I’m usually such as overthinker!”

This single is a milestone in Janet’s career and a huge personal achievement, as she explains, “When 17-year-old me left the show I was offered a record deal, and the label wanted me to release this as my first single. However, I wanted to write my own music and earn my place in the industry. I made a promise to myself that if I were still in this business 10 years on then I would release it….and here we are.”

“My audition video has stacked up some impressive numbers over the years, I’m so grateful for the platform the show gave me. No regrets! People are still discovering the video clip of me singing it today, and what’s lovely is there’s a big Janet Devlin rabbit hole to go down and a tonne of music to discover. I’d like to think it’s not too shabby, I’m really proud of my little indie catalogue which I’ve been building.”

Janet’s catalogue is set to expand even more with the release of ‘It’s Not That Deep’ in December. Already fans have been treated to singles ‘Place Called Home’ and Janet’s “seductively country-style” (DIVA Magazine) interpretation of Prince’s ‘Kiss’ – a crowd favourite during this year’s Confessional Tour.