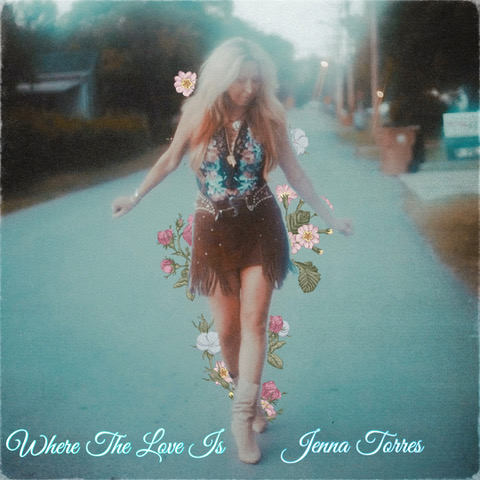 Singer-songwriter Jenna Torres has unveiled the video for “Where The Love Is,” the latest single off of her new album, All Heart. With its rolling, classic country sound, the song is an exploration of breaking through vulnerabilities in order find the bravery to seek freedom and happiness.

The stunning video for “Where The Love Is” was shot in Nashville. For Torres, a native New Yorker, Music City is her creative home away from home.

“At the time the video was shot, I was staying in a loft on Printer’s Alley — the perfect place to paint a picture of the aching loneliness in a relationship gone cold,” Torres says. “In contrast, Shelby Park on a beautiful sun-drenched day was an ideal setting to capture the warm hopeful feeling of going out in search of love.”
While the song itself was rooted in Jenna’s personal journey and the kinds of relationship revelations that are familiar to so many — the title of the track came from one very specific and heartwarming experience.
“When my daughter was just a tiny, little girl I took her to an appointment that was no fun at all,” Torres recalls. “When we stepped outside, she looked up at me and said, ‘Mommy, I don’t want to go there — I want to go where the love is!’ It hit me in the deepest way. It was one of those ‘Out of the mouths of babes’ moments.”
“In so many ways, they were the words I needed to hear,” she continues. “My life changed radically that year and from that day forward, I have made it my mission and my mantra to go where the love is — and even more importantly, to be a source of love for the people in my life.”
It’s a mantra she’s followed both in her life and through her music. Torres kicked off her songwriting career amidst the surreal surroundings of post-9/11 Ground Zero, turning her music into a kind of therapy. Since then, she’s split time between New York and Nashville, writing songs for Warner Music Group and Warner/Chappell Music, including songs for Martha Wash of the Weather Girls as well as a Top 10 Billboard hit for the band For King & Country with her co-writer Ben Glover. She received wide critical acclaim for her two previous albums, A Woman‘s Touch and Wild Sugar.
Watch the video for “Where The Love Is” here.

Jenna Torres’ current album, All Heart, is available on all popular music download and streaming platforms.