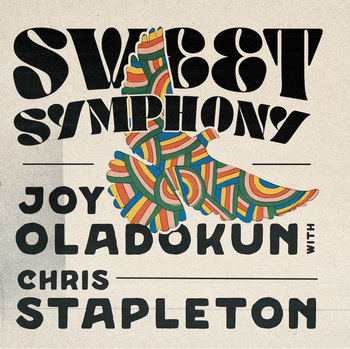 September 23, 2022—Breakthrough singer, songwriter and musician Joy Oladokun‘s new song, “Sweet Symphony,” featuring Chris Stapleton, is out today. Listen/share HERE.
Reflecting on the song, Oladokun shares, “‘Sweet Symphony’ is a song I wrote about the love that I got to witness my parents share as a kid. It’s about the vulnerability, the fear, and the ups and downs that come from loving someone. Showing all of yourself so that someone else can accept and celebrate you is what it’s all about. I’m excited to have Chris Stapleton on this song not only because he has one of the most iconic voices on the planet, but also, he’s just an incredible songwriter, artist, and instrumentalist. I feel very lucky and honored that he wanted to be part of this song.”

Continuing to receive overwhelming praise, Oladokun was recently featured in Vanity Fair, who proclaims, “Her name is both prescient and redundant. She oozes energy that shifts a room’s center of gravity and makes you happy for it. It is charisma and she has it in spades. It’s the way she approaches her craft too.”

Since her debut, Oladokun has been featured as part of NPR Music’s “Tiny Desk (Home) Concert” series, was a guest on the renowned podcast “Song Exploder” and has performed on “CBS Saturday Morning,” “Jimmy Kimmel Live!,” “The Tonight Show Starring Jimmy Fallon,” “The Late Show with Stephen Colbert,” “TODAY” and PBS’ “Austin City Limits.”
She was also named a member of the #YouTubeBlack Voices Class of 2021, a NPR Music/Slingshot’s 2021 Artists to Watch, a Billboard LGBTQ Artist of the Month, Spotify’s RADAR US: Artists to Watch 2021 and Amazon Music’s Artists to Watch 2021, was highlighted as part of HULU’s “Your Attention Please: The Concert” alongside 24kGoldn, Kiana Ledé, Lil Yachty and Swae Lee, and had her music featured on CBS’ “CSI: Vegas,” NBC’s “This Is Us,” ABC’s “Grey’s Anatomy,” ABC’s “Station 19,” NBC’s “America’s Got Talent” and HBO’s “And Just Like That” among many others.

Moreover, Oladokun recently collaborated with Brandi Carlile and Lucie Silvas on new song “We Don’t Know We’re Living,” with Noah Kahan on his track, “Someone Like You” and with Jason Isbell for a new version of Bonnie Raitt’s “I Can’t Make You Love Me” as part of her debut Spotify Singles session. Known for her powerful live performances, Oladokun completed her first ever headline tour earlier this year and has joined artists such as Maren Morris, My Morning Jacket, Jason Isbell, Pink Sweat$ and Leon Bridges on the road. She’s also performed at several major festivals including Bonnaroo, Lollapalooza, Hangout and Newport Folk Festival.