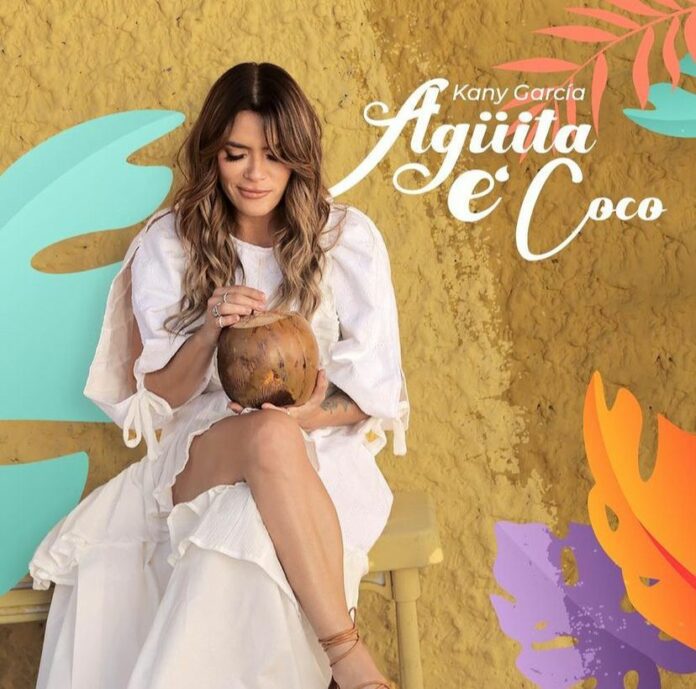 January 20, 2022 – Today, multi-award-winning Puerto Rican singer-songwriter Kany García captivates us again with her unmistakably vibrant fusion of lyrics and music on her new song “Agüita e Coco.“ The single is available on all digital streaming platforms, and the music video can be enjoyed via her YouTube channel.

Beguiling us with the Puerto Rican bomba rhythm, “Agüita e Coco” is just as refreshing as its namesake (coconut water), delighting us with Kany’s outstanding vocal performance and storytelling. This song is about a person who has moved on from serious relationships and just wants to have fun, until a special someone convinces her to give love another try. As the lyrics in Spanish say: “I drink you up like coconut water, little by little we go crazy.”
This song is written by Kany along with renowned Venezuelan musicians Yasmil Marrufo, Jorge Luis Chacín and Mario Cáceres and Colombian engineer and producer Richi López, who produced this track along with her previous single “DPM.”

The music video of “Agüita e Coco” takes us to the coastal town of Loiza, Puerto Rico, where a love story unfolds among its streets, plazas and beaches, while Kany performs in the company of folkloric dancers and percussionists. The visuals are directed by Alexandra Vivas for Rockanfella, Inc., the production company behind the video of her single “DPM,“ which has received over nine million streams and 13 million views in the three months since its release.

Both “DPM” and “Agüita e Coco” will be included on Kany’s next album, to be released this year.

After launching a successful U.S. tour in Autumn 2021, Kany will return this March 25 & 26 to El Coliseo de Puerto Rico, where she has headlined some of her most memorable concerts. Fans from her native isle are eagerly awaiting her return to hear her latest songs in person. In addition, she is preparing the next leg of her tour which will take her to the western United States. Visit www.kanygarcia.com for more information and to buy tickets.