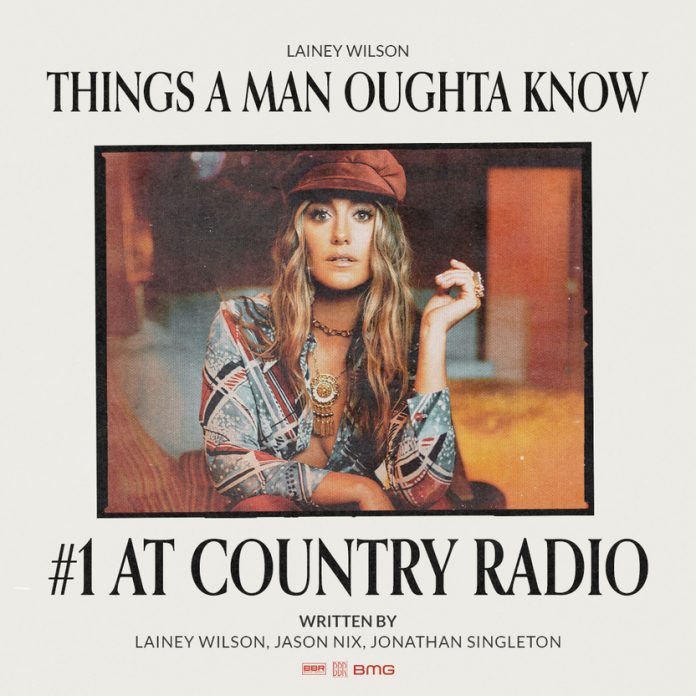 NASHVILLE, Tenn. (September 20, 2021) — “One of Country music’s most promising young stars,” (Whiskey Riff), Lainey Wilson has earned the No.1 spot on the Mediabase and Billboard Country radio charts with her hit “Things A Man Oughta Know.” She is the first new solo female artist to accomplish this feat since Gabby Barrett with “I Hope” in April 2020.

“Things A Man Oughta Know” has garnered more than 146 million on-demand streams and has been in the Top 10 in Country single sales for several weeks. The single (having reached the No.1 position on Sirius XM’s The Highway Hot 30 Weekend Countdown) is also having international success—it has been certified Gold in Canada, reaching the Top 5 on Canadian Country radio and is just as popular in the UK. The single, written by Lainey, Jason Nix and Jonathan Singleton, appeared on her critically acclaimed album, Sayin’ What I’m Thinkin’, which debuted earlier this year and was identified as an “early favorite for album of the year” by multiple outlets.

“It has been an incredible privilege to see firsthand how this song has impacted people. Thank you, Country radio for believing in it, sharing it with the world and taking this thing to No. 1—this is a moment I’ve dreamed of my entire life— and to do it with a song that is all about good character is icing on the cake,” said Lainey Wilson. “To my incredibly supportive team—thank you for always being by my side. I can’t wait to cry, celebrate and climb more mountains with you.”

Lainey is currently on the road on Jason Aldean’s Back In The Saddle Tour, working on new music and continuing to write. Proving worthy of being named as “one to watch” and “must listen” by many, Lainey recently won Music Row’s “Discovery Artist of the Year,” was selected as an iHeartCountry “On the Verge” artist and was nominated for CMT Music Award’s “Breakthrough Video of the Year” in addition to landing an Apple Music “Up Next” spotlight feature and being named the Opry NextStage artist for August. As part of the institution’s program, the Bell Bottom Country singer shared stories about her musical journey in two emotional videos (WATCH: Part 1 and Part 2).