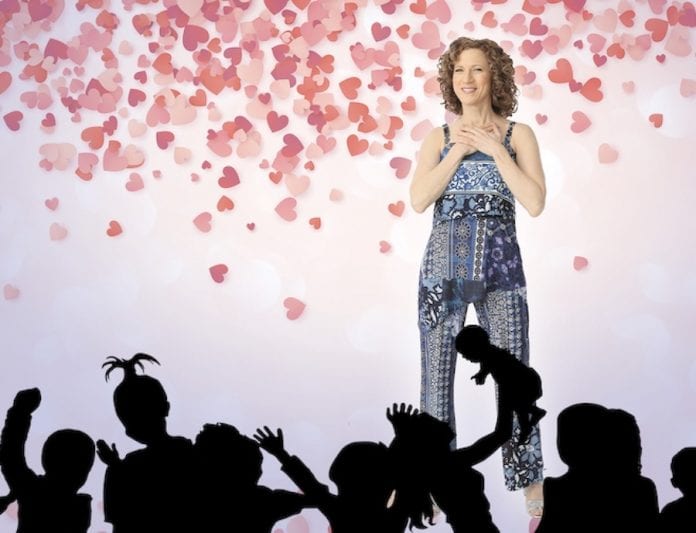 NEW YORK – All you need is love! Iconic children’s musician Laurie Berkner invites everyone to celebrate the sweetest day of the year at two special “Valentine’s Day” LIVE Virtual Family Concerts on Sunday, February 14 at 12:00 p.m. and 5:00 p.m. Eastern Time on Laurie’s website: HERE. For double the fun, a family ticket grants admission to one or both livestreams!

“I can’t wait to perform my first Virtual Family Concerts of 2021!” says Laurie Berkner. “I’m so happy to have the chance to celebrate love and family on Valentine’s Day with everyone who watches, and I think it’s a perfect theme to kick off our concerts for this new year.”

Laurie encourages fans of all ages to decorate their homes for Valentine’s Day and to wear something fun and valentine-y to the show — shades of pink and red are the order of the day, and love-hearts are the shape of the hour!

“There are so many things kids and families can do to get ready,” says Laurie Berkner. “They can cut out and decorate hearts to use during the show, and choose an instrument like a tambourine or a shaky egg so they can play along with the music. Everyone should be sure to pick out a stuffed animal to put on their heads during my ‘Pig On Her Head’ song. Of course, having some special Valentine’s Day snacks on hand would be a great idea, too!”

Laurie Berkner’s Valentine Day concerts will feature songs of love, family, and friendship, like “A Hug From My Mama,” “I Love You Daddy,” “My Family,” Face To Face,” “Blow A Kiss,” and “There’s A Little Wheel A-Turnin’ In My Heart,” along with an array of Laurie’s greatest hits, including “We Are The Dinosaurs,” “Victor Vito,” “Pig On Her Head,” “Superhero,” “Rocketship Run,” “I’m Gonna Catch You,” and more. Laurie hopes everyone will join in the Valentine’s Day spirit and sing and dance along.

A fun-filled virtual lobby will feature pre-show music and videos, Valentine’s Day games, and a fun heart-decorating craft activity to bring to the concert. For those who’d like to spend a few minutes chatting one-on-one in a video call with Laurie after the show, special Meet-and-Greet tickets are available.

One of the most popular children’s entertainers in the U.S., Laurie Berkner has filled countless venues nationwide with adoring fans. With an average of more than 12 million monthly streams and millions of albums, songs, and DVDs sold, Laurie’s songs have become beloved classics for children worldwide. The first artist to ever appear in music videos on Nick Jr., Laurie Berkner was featured in nearly all the episodes of the channel’s Jack’s Big Music Show. Laurie recently created her own Audible Original Series titled Laurie Berkner’s Song and Story Kitchen and will soon begin production on a second season. She has released thirteen bestselling, award-winning albums and will release a fourteenth album, Let’s Go!, on March 5, 2021. Laurie has authored a number of picture books based on her songs, the most recent of which were published by Simon & Schuster. She has also written the music and lyrics for three Off-Broadway children’s musicals produced by New York City Children’s Theater. Laurie has performed at Lincoln Center, Carnegie Hall, and the White House, among many other prestigious venues.

Each Regular Family Ticket includes access to one or both livestreams for one device and an exclusive “welcome” video from Laurie herself.

– Two-Minute Virtual 1-on-1 Private Meet & Greet with Laurie Berkner after the show. Participants will be called directly when it is their turn.
– Virtual Photo Opportunity with Laurie Berkner.
– Recording of video session emailed to ticket holder 3 days post-event.
– Opportunity for parents to chat with fellow families in the Virtual Waiting Room while awaiting their turn in line.
– Live tech support.

*Need-based tickets, intended for those who truly need a discount, are available.