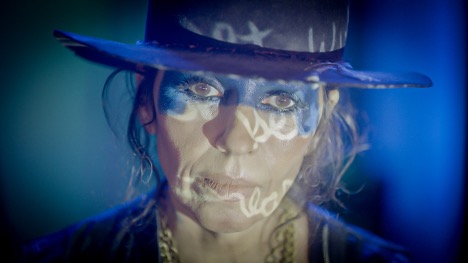 New York, NY – (April 16, 2021) – Iconic Singer-Songwriter, Producer and Pop Culture shapeshifter Linda Perry release her own music for the first time in over 15 years including scoring Hulu’s new hit documentary KID 90.  Perry best known for her groundbreaking songwriting career for artists such as Pink, Adelle, Christina Aguilera, etc has now set her sights on film and tv lending her musical prowess to a significant documentary.

90’s child star Soleil Moon Frye has created an original Hulu documentary, KID 90 about the coming of age. Composed of hundreds of hours of real footage as a kid in that era serving as a blueprint of Frye’s life.  At the end of kid 90, a 40 something Soleil Moon Frye is confronted by a letter she wrote at 16 years old.  Asking her now self a list of questions and hoping she feels loved.  Perry was inspired to confront those questions by writing THE LETTER which is featured on the KID 90 score that premiered yesterday with IndieWire.  “I feel proud of what I was able to create, and I am honoured that Soleil Moon Frye let me take this journey,” says Perry.  With many other exciting projects coming, Linda Perry will be continuing to make magic happen with her talent of scoring for some major upcoming projects.

“My dream was not to be a big rockstar, it was to create music that would play a supporting role in films.  Every song I write comes from a visual, not a word, not a strum,” says Perry.