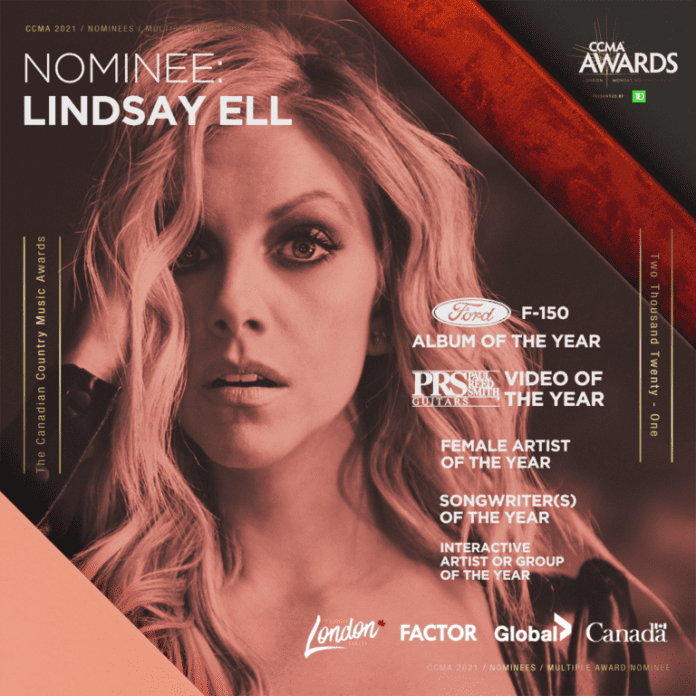 NASHVILLE, TN (September 23, 2021) — Chart-topping musician, vocalist, songwriter and BBR Music Group/Stoney Creek Records recording artist, Lindsay Ell has become the most nominated female artist for the upcoming 2021 Canadian Country Music Association (CCMA) Awards. With announcements taking place late yesterday, the chart-topping artist has gathered nominations in five categories: Album of the Year (for her critically-acclaimed concept album heart theory), Female Artist of the Year, Interactive Artist or Group of the Year, Video of the Year (for “wAnt me back“) and Songwriter(s) of the Year (for “wAnt me back” co-written with Kane Brown, Lindsay Rimes and Matt McGinn).

Earlier this year, the multi-talent celebrated her first nomination at Canada’s prestigious JUNO Awards for Country Album of the Year and her second No. 1 at Canadian Country radio with “wAnt me back.” With more than 200 million total on-demand streams, Ell was the first female artist to earn a No. 1 single in more than a decade on Canadian Country radio with her chart topping single “Criminal” (2017). Following that success, Ell went on to win two CCMA Awards, became a CMA and ACM Award nominee and earned her first No. 1 radio single in the U.S. alongside Brantley Gilbert with “What Happens In A Small Town” (2019). A wildly talented guitarist, Ell recently partnered with Siren Pedals to create her very first signature pedal, “The Etana,” which is available now.

Currently on the Blake Shelton Friends and Heroes Tour, beginning in November, Ell will embark on her first-ever headlining Canadian tour. Her wAnt me back Tour stop on November 26 will serve as the kick off to the 2021 Country Music Week festivities in London, ON ahead of the CCMA Awards on November 29. For tickets to any of the upcoming shows visit her website.

KEEP UP WITH LINDSAY ELL