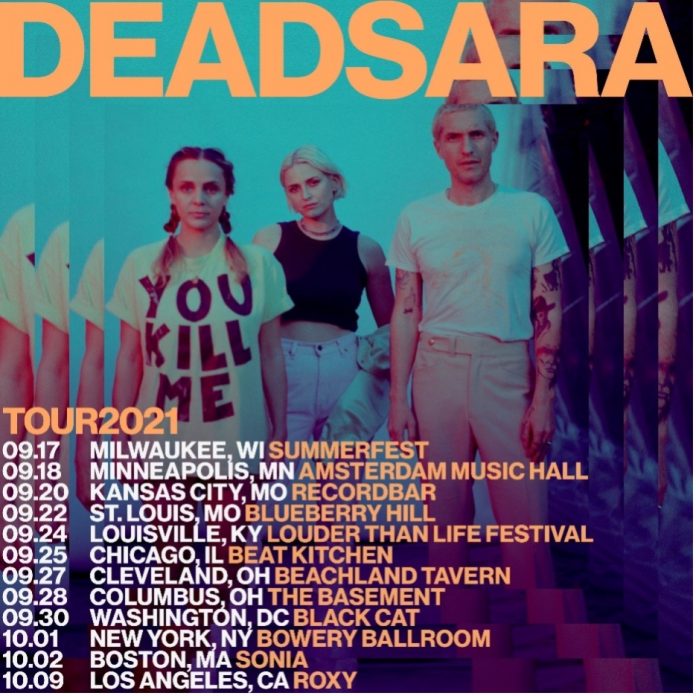 July 26, 2021 (Los Angeles, CA) – Today, Los Angeles rock band Dead Sara announce their first tour in nearly three years. Following an appearance at Summerfest in Milwaukee, WI on September 17, they begin their headline run on September 18 at Amsterdam Music Hall in Minneapolis, MN and canvas the country before returning to L.A. for what promises to be an unforgettable hometown gig on October 9 at The Roxy. Additionally, they grace the bills of Welcome to Rockville in Daytona, FL on November 11, and Shiprocked which begins its at sea adventure in Galveston, Texas between January 22-27.

Pre-sales for the headline shows begin on July 27 while VIP upgrades, which include meet & greets and exclusive merchandise, are available on the official fansite, thedeadicated.com. Tickets go on sale to the public on July 30th at 10:00 AM local time. Click here for further details.

Additional dates for 2021 to be announced later this year. Dead Sara will tour the world in 2022.

Over the past 18 months, Dead Sara have been hard at work writing and recording new material. Upon release last fall, “Hands Up” racked up 294K Spotify streams and 463K YouTube views for the track’s video. Receiving critical acclaim, Loudwire applauded it as “explosive,” and Consequence of Sound praised it as “raw and heavy.” Click here to stream “Hands Up.”

Renowned for their incendiary performances, Dead Sara are a Do Not Miss live attraction. The band are thrilled to be back on the road: “Turning up Willie Nelson’s “On The Road Again” to get in the right mindset for our Fall tour and to fill the void from human contact deprivation,” said lead vocalist Emily Armstrong. “We’ve missed y’all so much we could cry.”

Right now, they’re putting the finishing touches on their third album and first full-length since 2015’s Pleasure To Meet You. This will be their full-length Warner Records debut.

Dead Sara first broke through with their 2012 single “Weatherman“—a churning stew of bluesy punk riffs, chugging hard rock grooves, and throat-shredding vocals that reached No. 30 on Billboard’s Mainstream Rock chart and was followed by tour dates supporting Muse. “Hands Up” was the first new music from Dead Sara since September 2018, when the band released a stripped-down version of “Anybody,” a single originally found on Temporary Things Taking Up Space. That EP built on the success of 2015’s Pleasure to Meet You, which reached No. 2 on Billboard’s Heatseekers chart and No. 7 on the Hard Rock Albums chart. To date, Dead Sara has been featured on Rolling Stone, Interview, Guitar World, and Loudwire, and performed at the GRAMMY Museum. Look for more Dead Sara music coming soon.