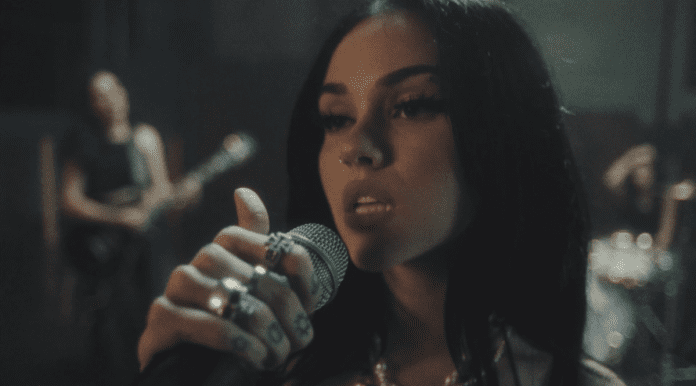 October 29, 2021 (Los Angeles, CA) – Today, punk rock/pop singer Maggie Lindemann has released “She Knows It,” her first song since the release of her January 2021 debut EP PARANOIA. “She Knows It” arrives with a video directed by Vixxion that features popular artist Jasiah as the lead male, and has appearances from collaborator Siiickbrain and popular alternative artist TOOPOOR. The video had a special viewing yesterday at Travis Barker’s House of Horrors on-line paid event. “She Knows It” is released as Maggie is seven dates into the nationwide Life Support Tour with Madison Beer. Full tour dates are HERE.

Watch “She Knows It” HERE.

Listen to “She Knows It” HERE.

“I wrote this song about how I liked a girl who had a boyfriend. She would confide in me about how shitty he was and say and do things that would kind of lead me on but then tell me she didn’t ‘mean it like that’…so I was like fuck it, I’m gonna write about it,” said Maggie of the song. About the video, she said: “I wrote up the concept kind of right when we made the song. I instantly had a vision for it and wanted to give it a high school 2000’s feel but also keep it current and industrial and surreal spin from a normal classroom setting. I wanted to tap into my high school fantasy — haha.”

After a string of singles in 2020, PARANOIA came at the top of 2021 and was immediately heralded by the press, with Maggie on the cover of Alternative Press with the magazine calling the EP “endlessly addictive,” while i-D dubbed it a “testament to her evolution as an artist…. recklessly abandoning her good girl image, Paranoia is Maggie’s postcard from the dark side.” The magazine named Maggie as one of the artists creating “the new emo revival.” Rolling Stone also discussed the inspiration and experiences that led to the creation of PARANOIA with Maggie. The project has currently amassed over 80.1 million total streams. Maggie has also released the trailer for her Mindset Collection, where she discusses personal struggles with trauma and anxiety – this is now available in full on the Mindset app.

Maggie Lindemann has quietly emerged as one of pop/punk’s most subversive forces. Without a filter, her uncompromising approach drove the breakout “Pretty Girl” to platinum status and over 1 billion streams in addition to anthems such as “Obsessed” (70.6 million Spotify streams) and “Couple of Kids” (48.7 million Spotify streams). She capped off 2019 with track “Friends Go” [feat. Travis Barker], which Ones To Watch described as “an electrifying, almost retro pop track.” 2019 also saw Maggie successfully launch her SWIXXZ clothing line. During quarantine, Maggie started her own podcast and record label, swixxzaudio. At 23 years of age, Maggie has truly uncovered her voice as a songwriter and injected a fierce dose of honesty regarding anxieties, obsessions, and insecurities into her music.