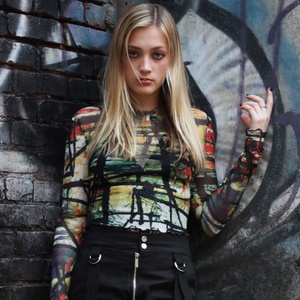 Nashville, TN – 17-year-old alternative rock artist Mia Morris just released her fierce new single, “Melodramatic.” With thrilling lyrics and vivid storytelling, Mia Morris displays her vast array of musical talent in the song. Every instrument heard on the track was played by none other than Morris as she showcases her vocal range and styling. “Melodramatic” is available to download and stream on all digital platforms worldwide.

“The more we learn about making videos, the more my imagination runs wild when coming up with concepts. Unlike some videos, I had a very clear picture of how I wanted to present the multiple deaths of the drama I create in my life. Creating drama is like crossing the street without looking both ways.” – Mia Morris

“Melodramatic” is the ultimate edgy anthem that resonates across all demographics. Kaleb Jones and Smith Curry aided Morris in the writing process. However, Morris played, recorded, and mixed the song herself. Morris incorporates a modern spin on the more traditional sounds of alternative, ska, and punk rock when writing her own music. Her take can be heard in “Melodramatic,” with a distorted electric guitar paired with clever chord progressions and playful, somewhat coarsely surprising lyrics. “The song ‘Melodramatic’ comes down to a simple message,” says Morris about the inspiration for the song. “Life is short, so don’t feed the drama.” It can be easy to fall into the gossip that surrounds us, but Mia Morris reminds us to check our egos at the door. The bridge of the song adds a striking break in the middle of the amped-up pop-punk flow. The gentle, youthful sound of a ukulele backdrops Morris’s toned-down voice, which sounds as if it were coming out of a payphone. This short visitation to calmness is interrupted by an eruption of drums and guitar which dive into the robust chorus.

Mia Morris is a rock inspiration wearing multiple hats as a singer, songwriter, and multi-instrumentalist. By age 12, she had a series of viral drum videos on her YouTube channel and amassed over five million views between them. To further pursue her dreams of being in the music industry, her family moved to Nashville, where she backed up over 120 artists as a side-woman in 2019. Since then, she started writing and recording her own music, releasing over 40 songs, almost all mixed and produced by herself. As Morris grew into her style, she took influences from No Doubt, Avril Lavigne, and Fountains of Wayne. Deemed a “drum protege” by other professional musicians, her musical resume puts her amongst some of the music industry’s most seasoned veterans. She was able to study with rock legend Kenny Aronoff, drummer for many notable artists such as Alanis Morissette, among other famous and accomplished drummers. Gaining traction for her many talents, Morris has accumulated a large following on several social media platforms. With over 34K TikTok followers, nearly 24.8K Instagram followers, and 51K YouTube subscribers alongside 9+ million views on her videos, Mia Morris is nothing short of a rockstar.

Mia Morris reminds listeners that there’s more to life than feeding into pointless drama. “Melodramatic” is available to download and stream on digital platforms worldwide. To keep up with Mia’s musical journey, follow her on Instagram @miamorrismusic.