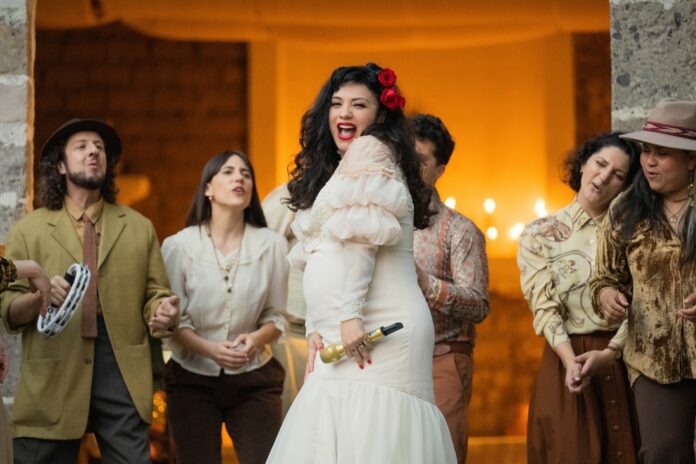 New York, NY (February 8, 2022) – Mon Laferte has released a new single for “Placer Hollywood,” the opening track to her latest album, 1940 Carmen. The live performance of the track is from her critically-acclaimed NPR Tiny Desk (home) Concert performance, which is approaching two-million views on YouTube since its release only three weeks ago.

The live video for “Placer Hollywood” was recorded in Tepoztlán, Mexico, which serves as the perfect setting for the vibrant single. On this track, she shares the celebration of love and passion between two souls and incorporates passages in Spanish, English, and even French, resulting in a universal work without language barriers.

“Placer Hollywood” is a cosmopolitan ballad that captures the environment Mon was in while creating 1940 Carmen, which takes its title from the Los Angeles address where she lived while writing and recording. The album is inspired by the soft folk-rock psychedelia of the “Laurel Canyon Sound” from the ’60s and ’70s.

Earlier this year, the Chilean singer recently released the music video for “Te Vi” which she recorded along with the Oaxacan women’s band Mujeres del Viento Florido at El Cantoral venue.

The video captures Mon Laferte adorned with a red dress in the center of the stage, accompanied by the band members established in Santa María Tlahuitoltepec and directed by its founder Leticia Gallardo.

Mon Laferte is nominated for a GRAMMY® Award for “Best Regional Mexican Music Album (Includes Tejano)” for her album SEIS. The ceremony will take place on April 3rd in Las Vegas, Nevada.