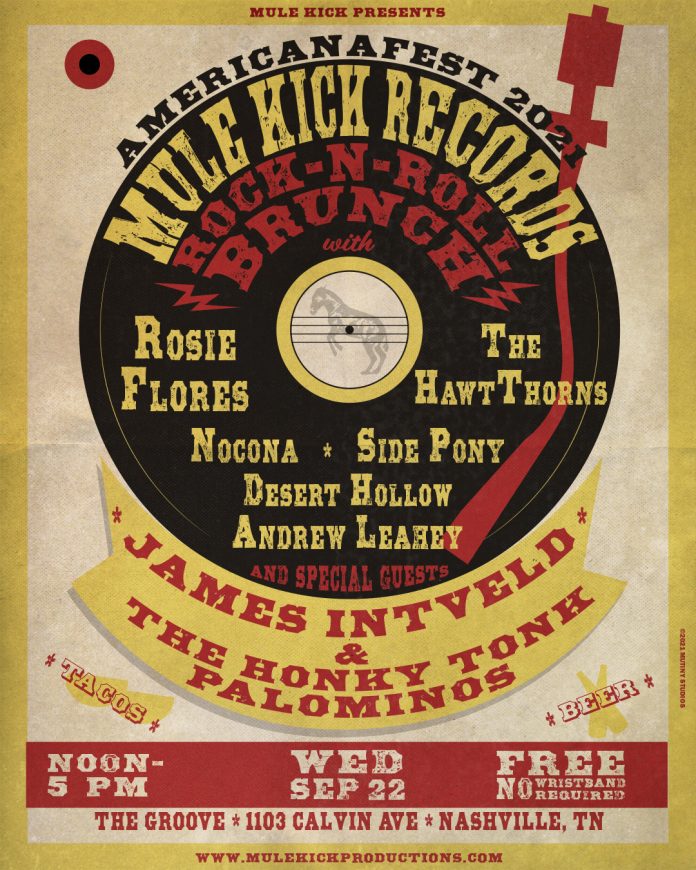 Mule Kick Records would like to invite you to their upcoming Rock-n-Roll brunch. The party takes place during Americanafest on September 22nd from 12PM – 5PM at The Grove. Performers will include artists from the Mule Kick Records roster.

Mule Kick Productions, the parent company for Mule Kick Records, was formed by musicians/producers KP Hawthorn (The HawtThorns,) and Adrienne Isom (NOCONA.) MKP was created in order to make the documentary Palomania, scheduled for 2022 release. The film documents the history of The Palomino Club of North Hollywood from 1949 to 1995. It tells the untold story of California Country music. Isom and Hawthorn were part of the team that re-opened The Palomino Club in 2018 for a fundraiser for The Valley Relics Museum.

Along the way, the team found it necessary to set up distribution for music that would be used in the film as well as for artists who were part of the niche scene of The Palomino Club and its legacy. Mule Kick Records first signing was the Los Angeles band NOCONA,. Their critically lauded Americana release, Los Dos, was released in July 2020.

This past July, The Rockabilly Filly, Rosie Flores & her band, The Talismen, released a double A-side single containing a reimagined cover of the Everly Brothers classic, “So Sad” and an original, “I’ve Got a Right to Cry.” The video for “So Sad” premiered in Cowboys & Indians. Long before Americana music received its own category at the Grammy Awards, Rosie Flores helped pioneer the genre’s blend of American roots music. She’s an originator — a musical mainstay for nearly half a century, with 11 solo albums to her name countless accolades under her belt.

East Nashville duo, The HawtThorns, are an Americana band whose sun-kissed songwriting, fiery electric guitar, and lush vocal harmonies evoke the California coastline as much as the Bible Belt countryside, the HawtThorns are rooted in the collaborative chemistry of husband-and-wife duo KP and Johnny Hawthorn. This summer saw them releasing a cover of the Tom Petty classic, “It’s Time to Move On,'” and an accompanying video that premiered in Americana UK. Jonny & KP’s sophomore full-length Tarot Cards & Shooting Stars will be released on February 4, 2022

Mule Kick Records is also excited about new folk duo Desert Hollow featuring Xander Hitzig and Nicole Olney. Their debut EP, Thirsty, was released on May 14, 2021. Flaunting a Gram Parsons and Emmylou Harris-like confidence in their delivery, one is pulled back through the decades in a time machine made of stringed instruments only to land in present-day Los Angeles’ Alt-Country scene.

The latest addition to the Mule Kick stable is Andrew Leahey. A timeless rock & roll band for the modern age, Andrew Leahey & The Homestead are torchbearers of an anthemic, guitar-driven sound once held aloft by icons like Tom Petty, Bruce Springsteen, George Harrison and Harry Nillson. It’s a sound that’s taken the Nashville-based Leahey around the world, from sold-out shows in Norway, Mexico, and South Africa to a string of cross-country tours back home. Along the way, his songwriting — hailed by Rolling Stone for its “celebratory mix of sharp storytelling and fist-pumping rock & roll swagger.” Leahey is readying the release of a two-volume set, American Static Volume 1 will drop on October 22nd and Volume 2 will see the light in late winter 2022.

Last but not least is rockabilly veteran, James Intveld. As a Palomino club alumni and torch bearer of the California country genre, the singer and songwriter has penned songs for artists including Rosie Flores’ “Crying Over You.”