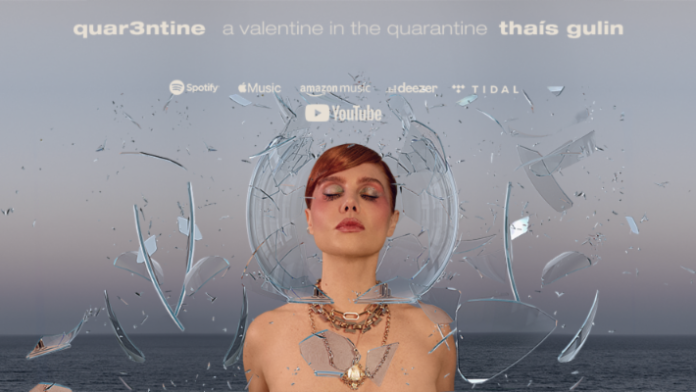 To pre-save the single on music streaming services due out tomorrow, click HERE.

On the new single, Gulin says, “When COVID-19 first hit Brazil, we watched President Bolsonaro carelessly mishandle the pandemic by allowing the virus to rapidly spread throughout the country.”

“He seemed to enjoy it,” she further explains. “He would encourage people to disregard public health guidelines such as wearing masks and staying six feet apart, and would publicly mingle with his supporters by shaking their hands and hugging them. This is a political song disguised as a love song. It’s like if the emergency of love was running in parallel to the despair of political happenings.”

The video for the US debut of “quar3ntine – a valentine in the quarantine” was filmed remotely during the height of the pandemic when the city of Rio de Janeiro was on lockdown. Guilin worked with her neighbor during this time to film an accompanying video for the single, and the result is stunning—beautiful vocals, raw emotion, all set upon a backdrop of an eerily deserted city.

Thaís Gulin is a Brazilian singer, songwriter, and actress born in Curitiba, Brazil. Her 2007 debut album, Thaís Gulin was considered “one of the great musical revelations of the year” by Rolling Stone. In 2008, she was nominated as Best New Artist at the Rival Petrobrás Awards. In 2011, Gulin’s second album, ôÔÔôôÔôÔ, earned her national acclaim and featured collaborations with renowned singer-songwriters Adriana Calcanhotto, Chico Buarque, and Tom Zé (Brazilian-stars-composers), as well as her own compositions and partnerships with Ana Carolina, Kassin and Moreno Veloso. According to the LA Times, “Gulin possesses a stunning voice in the grand style of Brazilian singers. She could break your heart from 50 paces. Just close your eyes and listen.”