Country singer-songwriter Christine Kindred weaves her love of ‘90s country music into her original music to create catchy tunes with heartfelt lyrics. We are pleased to premiere Kindred’s new single “Heartbreak Heart Attack” via Heartsong Records which will be releasing tomorrow on all digital platforms.

This song resonates with the brokenhearted and the ones who lost someone they never intended on losing.

This song is by far my favorite song I’ve written so far. The music, the style, everything really represents exactly who I am in country music. 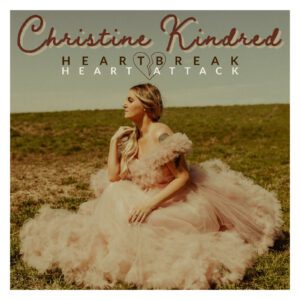 I wrote “Heartbreak Heart Attack” on the floor of my bathroom a year ago during COVID. I came up with the hook first and loved it so much, so I decided the rest of the song really needed to have tons of emotion, and I wanted to express the feelings you get when you really love someone, but you both know it’s just not going to work out in the end, and someone is always going to get hurt. I wrote this song with so much emotion and wanted the music to bring the words to life even more.

After I wrote “Heartbreak Heart Attack,” I immediately sent a rough phone recording to my producer Dave Elwert and said, “This is definitely going to be my next release.” I was in the studio a few weeks after that; we produced it and brought my idea of this song to life!

Christine Kindred is a rocking country singer-songwriter from Indiana. With vocal power and flare, she controls the stage and the crowd with her blend of ‘90s country and original songs mixed with beautiful pitches and tones. A crowd favorite at many venues, bars, and clubs, Kindred has made her mark on big cities like Chicago, Illinois, and Nashville, Tennessee, and made her way to Los Angeles, California as a contestant on The Voice. Kindred has often seen big names on the same marquee as her own, opening for Jo Dee Messina, Eli Young Band, Lindsay Ell, Colt Ford, Craig Campbell, and many others. Passion collides with stage presence and rocking country music every time Kindred takes the stage.