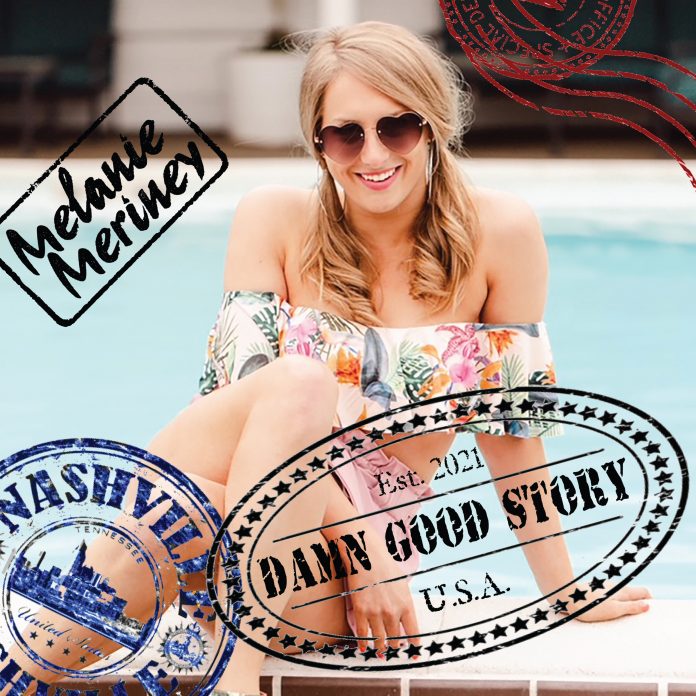 Nashville country artist Melanie Meriney grew up in Pittsburgh, Pennsylvania with country and rock music being played in her household. She cites her musical influences as Shania Twain, Phil Vassar, Taylor Swift, Fleetwood Mac, and Miranda Lambert. She was eventually drawn to Music City and received dual majors in English and songwriting eventually earning a Master’s degree in Education.

Meriney has appeared in performance lineups alongside Little Big Town, Journey, Darryl Worley, The Commodores, and more. Her song “Sober You” has racked up over 121K streams on Spotify. Her most recent release “Damn Good Story,” serves as the second single off of her upcoming project Chameleon which will sonically combine her various multi-genre influences with masterful lyricism and storytelling.

Can you tell us a little more about the story behind “Damn Good Story”?
Yes!  This is a song I wrote with Krista Angelucci and Chelsea Summers about summer love!  We were discussing relationships and experiences we entered into knowing that they were a bad idea or temporary, and kind of combined our stories into a beach song about a girl who knows it isn’t going to last but knows it’s going to make a great story someday.

Do you have a favorite part of the song? Maybe a favorite lyric?
I think my favorite part may be “sayin’ to me lines I’m sure he’s used a thousand times, but ok, I’ll bite” — I think it pretty much encompasses the whole hook of the song, which is knowingly entering into something even though it undoubtedly will be temporary.

Krista and Chelsea are really great friends as well artists and songwriters, so we always have fun when we write. Most of the session, we end up gossiping and going on tangents, but I think our personal chemistry is why we work so well together as co-writers.

The single is from your upcoming project Chameleon. What can fans expect from that project?

This project is a fun one because it combines all of my various influences growing up into kind of a sonic kaleidoscope. Each song has elements of different genres like country, pop, rock, and even reggae. “Damn Good Story” is more of a country track, so fans can expect the next single to change it up!

How did you first get started in music, and was there a particular moment when you knew you wanted to pursue music as a career?
My start in music began when I went to my first concert in third grade. I saw Shania Twain with my parents in Pittsburgh and since then was convinced that she had the best career in the world.  I had my mom sign me up for voice lessons, and the rest is history.

My parents aren’t in the music field, but they did play quite a bit of music growing up. I heard a lot of artists like Fleetwood Mac, Van Halen, Martina McBride, Dixie Chicks, Shania Twain, and Phil Vassar. That, combined with the fact that Pittsburgh has a big rock and rap scene and that I’m a ‘90s baby, gave me a lot of the influences that inspire my music today.

Whether it’s a story, a lyric, a particular vibe, etc., I hope my listeners can relate and connect with something!  I think music is a great congregator in that you know that you aren’t alone. It gives us human connectivity, which is so important in this day and age.

You’re going to have to work harder and be more persistent to get the same results, but the dream is achievable! Know who your genuine friends are and hone your craft the best you can by surrounding yourself with talented people!

I am excited to continue releasing singles off of this project into the Fall. The next one is a little more rock and roll and edgy, which I love, so be sure to follow me on Spotify and social media to stay in the loop about the next release date! It’s coming soon!