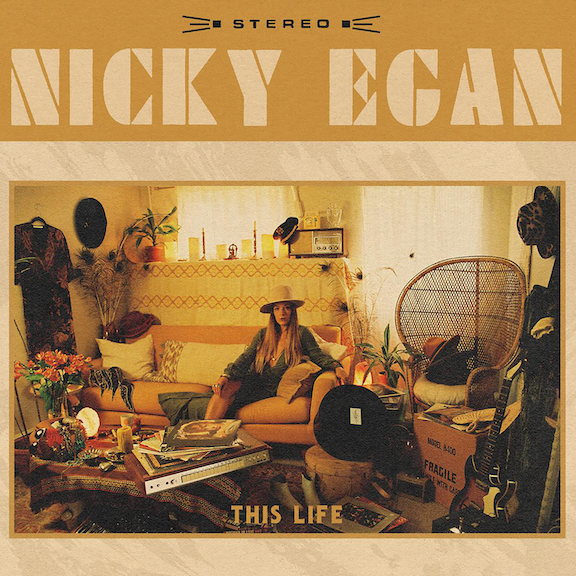 Born and raised outside of Philadelphia, Nicky Egan continues to make a steady mark in the music scene, carving out a unique journey and solidifying herself as a multi-talented creative and multi-instrumentalist. She’s performed all over the country fronting her own musical projects along with as a hired-gun for Chicano Batman, Tune-Yards, Carla Morrison, and Turkuaz to name a few.
After graduating from Berklee College of Music with a degree in Contemporary Writing and Production, Egan spent seven years in Brooklyn, her early years spent touring as part of powerhouse funk ensemble, Turkuaz, doing DIY tours consisting of the picturesque young millennial rock-and-roll lifestyle of squeezing into old vans, sleeping on floors and returning to the city only to make some extra cash nannying and waiting tables. After parting ways with Turkuaz to focus on her solo career, Egan independently released three of what she dubbed ‘digital 45’s’, premiering an A/B side each month, with a video attached to each A side, accompanied by a release show and live screening. These ‘digital 45’s’ became a 7-song EP, The 45 Homestead Project, which was released via Ropeadope Records, garnering much praise from tastemakers like American Songwriter, Okayplayer and Performer Magazine. “Nicky Egan has the finesse of Bonnie Raitt merged with the primal force of Janis Joplin. It is a rare combination. Her passion is a joy to behold – and her talent is undeniable. She belongs in any conversation about great contemporary female soul singers. If you’re up for a revelatory evening, then put her high on your list.” -Steve Morse, Music critic on staff at the Boston Globe, contributor to Billboard and Rolling Stone.
Around 2015, Egan began fronting a new project, writing and recording music with a cast of fantastic New York players, securing residencies around the city, and performing to enthusiastic crowds.
While at a crossroads in her own project, during a time when she’d have to re-evaluate some tough relationships, Egan received a call from the manager of Los Angeles psych-soul staple, Chicano Batman, looking for a keyboardist and vocalist to join them on their Spring tour. Egan packed a few suitcases, a hat box, and relocated to LA. What was supposed to be a spring run turned into four years of Egan playing keys and singing as a touring member with the band, performing alongside the likes of Portugal The Man, Vampire Weekend, Jack White, and Khurangbin.
In between tour stretches, Nicky Egan has been stealthily plugging away with New York based producer and Dap-Kings guitarist, Joe Crispiano. Beginning with demos written and recorded in Joe’s Staten Island apartment while his neighbor banged on the ceiling came to fruition as a full length album, recorded in part with their friends at the inimitable Diamond Mine Studios, and in part in Dumbo, NY in an unnamed dungeon where the two spent one too many hours drinking double espressos, margaritas and building vocal booth forts. The entire album was recorded to 8 track tape machine. Driven by honest confessional songwriting and influenced by your favorite classic soul sounds, the record features a who’s who of NY’s most sought after players including Homer Steinweiss, Victor Axelrod, Brian Wolfe & Elizabeth Pupo-Walker, to name a few and will be released jointly via Transistor Sound/Colemine Records. Nicky Egan currently resides in Los Angeles, where she is preparing for the release of her forthcoming 10 song LP, This Life.
Nicky Egan’s new album This Life will be available June 3rd on limited vinyl, CD and digital/streaming platforms via Transistor Sound/Colemine Records.