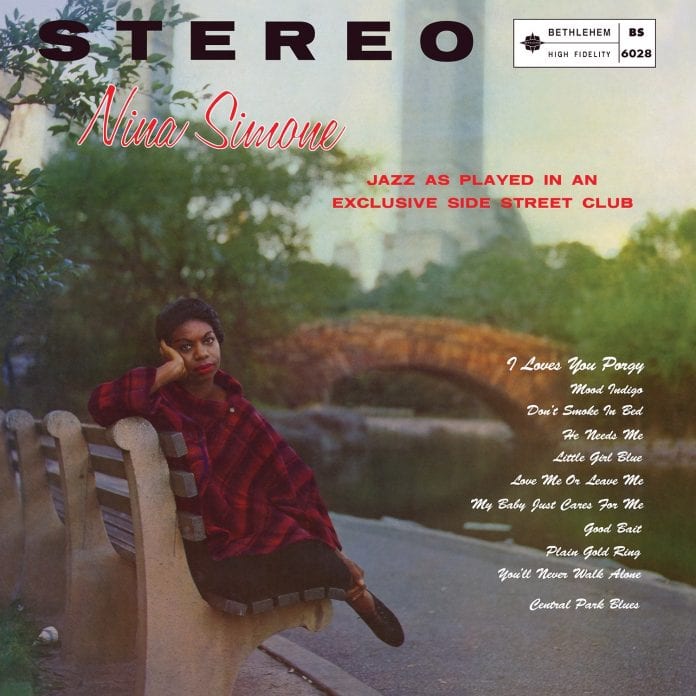 LOS ANGELES, Calif.  — It’s rare when a debut album introduces a musician who already has a fully developed artistic vision, but Little Girl Blue is one such recording. Released in February, 1959, it reveals Nina Simone as having already honed her unique talents as a singer, pianist, and arranger. It is amazing to consider that she was not yet 25 years old and had only played her first professional gig a little more than three years before recording these tracks — which were done all in one day — at the end of 1957.
BMG is proud to present a brand-new reissue of Little Girl Blue, which has been justifiably celebrated as a timeless classic. In her essay written specifically for this release, Daphne A. Brooks, author acclaimed book Liner Notes for the Revolution, puts it best when she asserts that Little Girl Blue presents “an astonishingly daring, dazzlingly confident, endlessly adventurous artist with a deep well of formidable instrumentality up her sleeve as well as a wide and robust, rich and varied knowledge of jazz, blues, American songbook, folk and spiritual standards and aesthetics.”
Little Girl Blue‘s multi-phased release begins on June 1 with a digital release (on high-definition and standard audio) that coincides with African-American Music Appreciation Month. A Barnes & Noble exclusive “clear blue” 180-gram vinyl edition will be available starting July 16, while August 13 is the date Little Girl Blue comes out globally on 180-gram black vinyl and CD. Additionally, this reissue boasts a fresh stereo mix done by four-time Grammy winner Michael Graves as well as a vinyl remastering by the renowned Kevin Gray. Grammy winner Cheryl Pawelski produced the reissue.
These 11 tracks are still thrilling to experience nearly 65 years after they were recorded. Simone delivers haunting, heart-aching ballads like “Plain Gold Ring” and “Don’t Smoke in Bed” along with swinging tunes like “Love Me or Leave Me” and her up-tempo interpretation of Duke Ellington‘s “Mood Indigo.” Simone’s inventive interpretative skills also are on display with her haunting arrangements of Rodgers & Hammerstein‘s “You’ll Never Walk Alone” and “Good Bait,” which is played much moodier than Count Basie‘s original. Her love of classical music surfaces in the Bach-esque passage in “Love Me or Leave Me” and, most prominently, in the title track, which includes bits of the traditional Christmas carol “Good King Wenceslas.” The closing tune, “Central Park Blues,” is the sole Simone original, a spirited instrumental that touches up together the album’s many moods.
Little Girl Blue also features two of Simone’s most well-known tracks. Her sensational rendition of “I Loves You, Porgy” was a big hit upon release, and was her only song to crack Billboard’s Top 20. Her jaunty performance of “My Baby Just Cares for Me” brought Simone renewed public interest after it was used in a popular 1987 Chanel No. 5 TV commercial.
Nina Simone took a rather unusual journey to becoming “Nina Simone.” Born Eunice Waymon in 1933 in rural North Carolina, she was a child prodigy on piano, and attended Julliard for a year in 1950. Afterwards, she lived with her family in Philadelphia. With aspirations to be a classical pianist, she applied to the city’s prestigious Curtis Institute of Music, and was heartbroken when the school rejected her — which she felt was racially motivated. After teaching piano for a while, she learned more money could be made playing in nightclubs.
In 1954, she got her first gig at the Midtown Bar & Grill, a nondescript Atlantic City nightclub. This job, however, created several significant turning points in her life. Because her religious family would disapprove of her performing in a bar, Eunice Waymon took the name Nina Simone (Nina was a nickname an old boyfriend gave her and Simone was for her favorite French actress, Simone Signoret). The club’s owner also made Simone sing during her sets, something that she had never done in public before. Her seven-hour sets, furthermore, forced Simone to learn a wide variety of songs; this cultivated her distinctive genre-blending style, which included injecting classical elements into popular tunes.
Quickly becoming a popular performer at the Midtown, Simone worked her way up to playing increasingly larger rooms. By 1957, she had attracted the attention of Bethlehem Records, a small but established New York City jazz label. She signed a one-record contract with Bethlehem that included a second album option and, more significantly, gave her the power to choose the record’s musical direction.
When Simone entered the Beltone Studios in midtown Manhattan to make Little Girl Blue, it not only was her first professional recording session, but she arrived having rehearsed only a few times with her rhythm section, bassist Jimmy Bond and drummer Albert “Tootie” Heath. Add in the fact that the songs were basically recorded in one take, Simone’s confident, accomplished performances on Little Girl Blue are all the more impressive.
Simone did leave Bethlehem after Little Girl Blue, moving on to the larger labels Colpix, Philips, and RCA. During her lengthy, legendary career, she recorded more than 40 albums, creating a sublime catalog of powerful recordings that include “To Be Young, Gifted, and Black,” “Strange Fruit,” “I Put a Spell on You,” “Sinnerman,” “Feeling Good,” and “Mississippi Goddam.”
A 2018 Rock & Roll Hall of Fame inductee, Simone has been the subject of two documentaries, The Amazing Nina Simone and the Academy Award-nominated What Happened, Miss Simone, which inspired the biography of the same name. And in the category of long-overdue recognition, the Curtis Institute awarded Simone an honorary degree in 2003 — just a few days before she passed away.
Little Girl Blue stands as Nina Simone’s majestic first offering in the still-impactful legacy of her life and career.