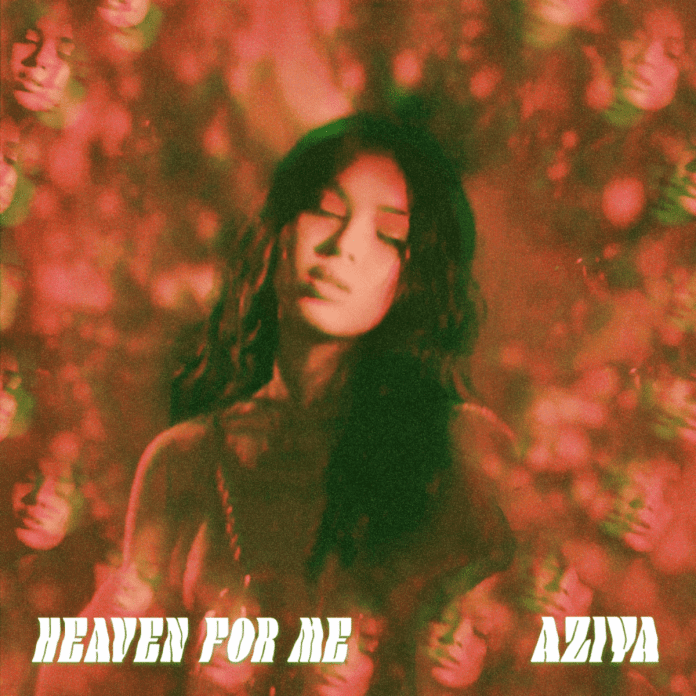 April 22nd, 2021 – British musician Aziya is just 21 years old, but her talent and wisdom are far beyond her years. Today, she shares her newest single “Heaven For Me,” a track with psychedelic roots, that she wrote and co-produced earlier this year. This is her second single off of her debut EP, coming this summer, via Platoon. The accompanying video, directed by Thomas James (Young Fathers, Sam Fender, Nothing But Thieves), takes you on a dreamy, kaleidoscopic journey that serves to firmly bolster the feel of the song.

Speaking on the single Aziya states: “‘Heaven For Me’ is a romanticized and fantasized version of a very toxic relationship – it relays the story of someone in love with a person plagued by narcissism and inner demons. I’ve tried to depict the ill fate it brings to the one in love with that person. It’s a fairytale description of a very real scenario that happens in front of us everyday.”

“I wanted the video to have that hazy, dreamy, ethereal quality to it. I produced this track referencing a lot of psych-rock bands – from Led Zeppelin to Ebo Taylor so I definitely wanted it to have a nod to the 70s – the prime era of psychedelic music.”

Earlier this year, Aziya stormed onto the scene with the release of her ferocious debut single “Slip!“. The track instantly caught the attention of Vogue saying she’s “an emerging rockstar for Generation Z,” and Billboard saying that “Slip!” “demonstrates what she can accomplish as a pissed-off pop-rock voice with a sharpened pen,” among many others.

Throughout 2020, with live stages unavailable, Aziya used the time to draw on her wide set of musical loves and post riff-heavy covers online. Tackling everyone from PJ Harvey, to Aussie psych weirdos Pond to Jimi Hendrix, when she uploaded a take on Grimes’ “Oblivion” – complete with looped live instruments, angular guitars, and on-point vocals – the Canadian singer then reposted the cover on her own socials. In addition to Grimes, her talents were also recognized by US megastar H.E.R, who invited Aziya to perform on her Instagram live series ‘Girls With Guitars.’

Aziya’s determined to cement herself as a musical all-rounder. Picking up a guitar at age 10 and beginning to write her own music shortly after, she spent the time since graduating from the BRIT school in 2018 honing her craft, learning to produce and becoming a force to be reckoned with – both vocally and instrumentally. Inspired by a set of strong-minded musical heroes including Patti Smith, Tame Impala, and Prince, she has all the preparation, personality, and power to make her own mark. “A lot of the hunger comes from me wanting to change the norm and make it clear to people that hear my music that it’s me writing and playing,” she nods. “I want to be the artist that I didn’t get to see growing up.”