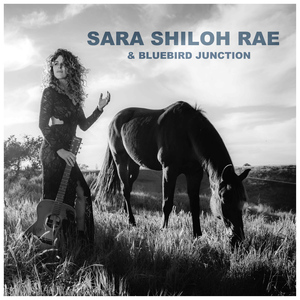 Sara Shiloh Rae and Bluebird Junction’s self-titled debut album is a homecoming. That’s true sonically, as the record’s ten original songs are deeply rooted in vintage Americana – with country rock, folk, bluegrass and hints of jazz woven through the tracks. It’s a homecoming in another sense as well: the album was conceived during the first phase of Covid-19 lockdown, while Sara, an L.A. native, was stranded in a tiny agricultural village in France.

During nearly ten months of isolation, a long-distance romance blossomed with California-based banjo player Max Hoetzel. The two began a musical collaboration, initially remotely, and ultimately in person, once restrictions were lifted, writing music together on a farm in Santa Ynez, CA . Their interpretations of standards such as Johnny Mullins’“Blue Kentucky Girl,” Townes Van Zandt’s “White Freightliner Blues,” and Peter Rowan’s “Walls of Time” landed them in Bluegrass Today, and received glowing reviews in indie music magazine Noteworthy Music.

Ms. Rae grew up in L.A. and North Carolina in a family steeped in American folk music. After studying guitar at McCabe’s and performing her first live show at the legendary Ash Grove, she discovered classical music and went on to devote herself to opera.

Sara Shiloh Rae returns to her roots in this record, showcasing astonishing vocals that shift effortlessly from the wry to the sultry to the plaintive. The songs tell stories rooted in heartbreak and hard-earned wisdom– shot through with humor and generosity.