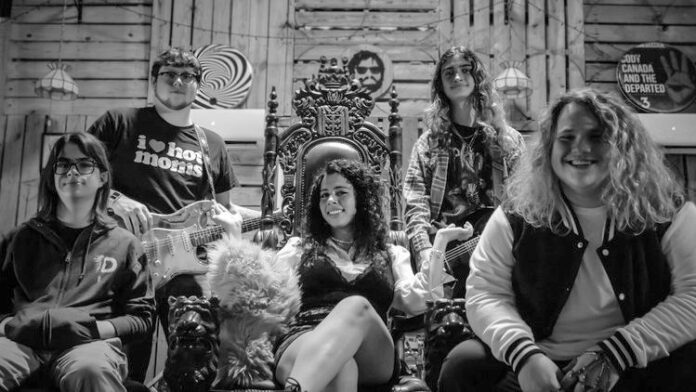 Nashville, TN-(July 28, 2022)-Rock in Rio, the most popular music festival in Brazil, launched another edition in Portugal last month featuring another edition in Portugal last month featuring some of the biggest names from the world of rock and pop including Black Eyed Peas, Liam Gallagher, Post Malone, The National, and Muse.  This year, School of Rock bands from all over the world traveled to take the international stage, showing that age is no frontier for the talents featured at Rock in Rio Lisboa.  Seven kids from the School of Rock New Braunfels (Texas) were selected to perform including Dierks and Willy Canada of the band Waves who released their first EP “Take It Or Leave It” earlier this year produced by AJ Vallejo of the renowned rock band, Vallejo.  Reviews of the band’s first recorded effort tout the promise of the new generation of musicians.  The song “Try” was added to the BMI Texas Top 10 Spotify playlist and their music has been picked up by a slew of college radio stations across the country.  www.wavesintexas.com.

“It’s not country, it’s not Americana, but it IS a testament that rock ‘n’ roll still has a chance with the next generation.  It’s punk energy, with a touch of pop to soften the edges. Any track on ‘Take It Or Leave It’ could have slid right into the soundtrack of the American Pie franchise. They’ve got chops and are just getting started.”
-Galleywinter

“Waves arrive on the scene with a highly enjoyable EP that crosses several genres. I had a set of musical expectations heading into this based on the band members, but this eclipsed what I had in mind. Waves have decided they do not want to adhere by the rules so the combination of country, alternative metal, and a dash of some rock have given them their own identity. With the average age of the band being 16 years-old, this is even more impressive.”  -3 Songs & Out

Despite their very young ages ranging from 13 to 19, Waves has long lost their proverbial baby teeth on the performance stage. For years the band has played at notable venues across the country and rocked massive festival crowds including 3 consecutive performances at Mile 0 Fest in Key West, Florida. Upon their return from Rock in Rio, Waves journeyed on to a 3-day run with Billboard Top 40 charting rock band, Kingdom Collapse.

After a whirlwind year of international travel and performances, Waves is celebrating the release of their first music video for “Try.”  The video features a montage of live performances coupled with day-in-the-life-of snapshots of a little ol’ band with the pulling power of a riptide.  Here is a link to check it out. https://www.youtube.com/watch?v=OoWznXgo5ZY