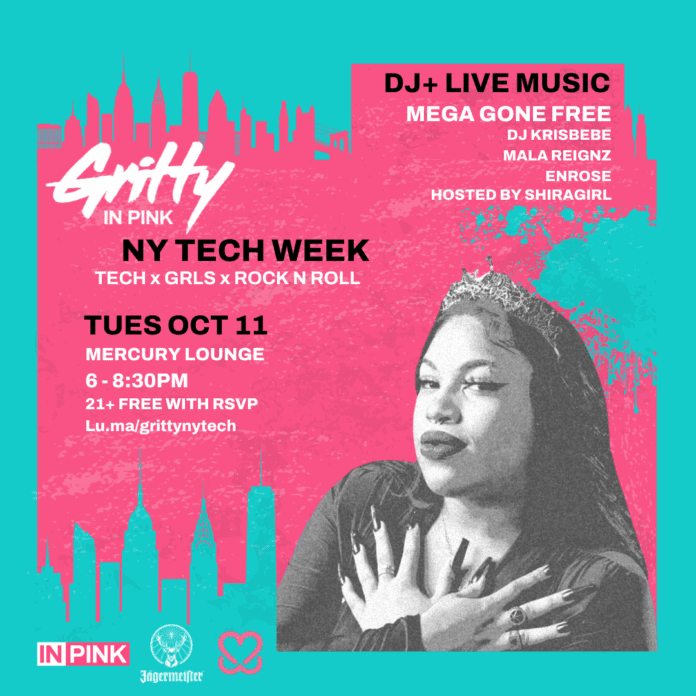 New York City, NY | OCTOBER 2022 – Gritty In Pink is headed to the city that never sleeps for New York Tech Week on Tuesday, October 11 from 6 PM – 8:30 PM at the Mercury Lounge. The 21+ event will be sponsored by Gritty In Pink’s new marketplace for womxn in music INPINK, Jagermeister, and Keep A Breast. Leading up to the show, Gritty In Pink will have a pre-show Instagram Livestream on October 6 at 5 PM PST/8 PM EST which will feature MegaGoneFree, Mala Reignz, and Enrose hosted by Shiragirl and Xtine Reckless.

The TECH x GRLS x ROCK N ROLL event comes off the heels of their 90’s All GRL Jam at The Echo LA in partnership with Live Nation. Along with a special GRL interview with Grammy-Award-winning artist and activist Melissa Etheridge, who was announced as Gritty In Pink’s Strategic Advisor for their marketplace INPINK back in March. The female-led community is on a mission to change the boys club culture within the tech and music industries by providing the INPINK marketplace for women in music.

Attendees can expect a set from DJ Krisbebe and live music from rising star MegaGoneFree, disco-rap queen Mala Reignz, and singer-saxophonist Enrose. The evening will also be hosted by Gritty In Pink ringleader and frontwoman Shiragirl.

The event will be free RSVP with login to INPINK at the door. INPINK is a new platform connecting the music industry to a diverse community of female creators and pros. Visit INPINK.com to learn more information and sign up.

To those in the NYC area for NY Tech Week, see you at Mercury Lounge on Tuesday, October 11 at 6 PM!