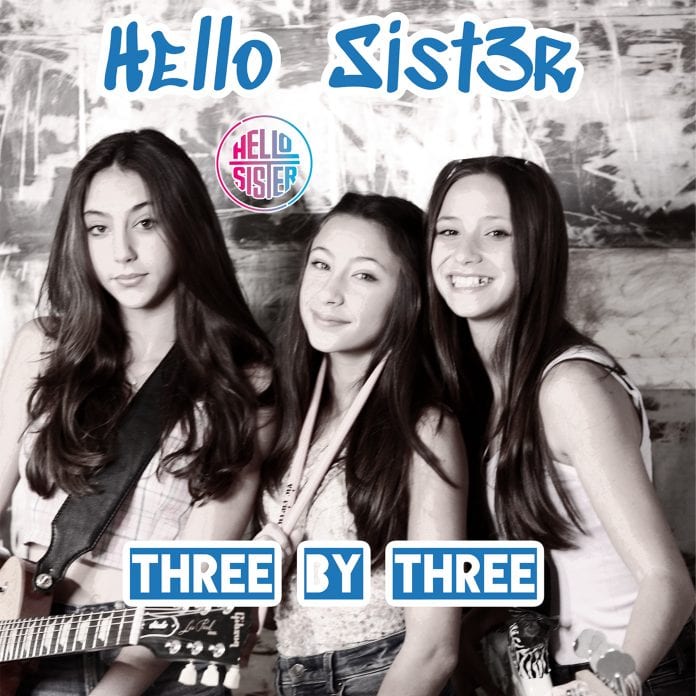 Teen pop-rock band Hello Sister has released their first-ever EP, entitled Three By Three which dropped on May 14, 2021. The band, made up of singer-songwriters and siblings Grace, Gabriella, and Scarlett Mason, felt the title fit perfectly, as the EP contains three songs by the three girls. The trio will also announce summer tour dates shortly on their social media. Additionally, the band auditioned for the judges on Season 16 of America’s Got Talent. Episodes will start airing June 1. “It was a great experience, but we can’t spoil anything just yet,” the girls said.

The Three By Three EP contains the new original songs “Nervous” and “I Just Met You” and the cover of “Here I Go Again.” “Nervous” has a catchy pop melody with an R&B groove and is about trying to impress someone and “so many of us can relate to that,” says Grace. On “I Just Met You,” Gabriella says that she “is happy that I get to do a real guitar solo.”  The song inspires young teens not to let someone else control their feelings. “Here I Go Again” is a cover of the ‘80s hit power ballad by Whitesnake. Scarlett, who’s a huge Whitesnake fan says, “I love the drum parts and they are one of the bands that has actually inspired our sound.” The girls are excited to get back on the road this summer and look forward to performing these songs.

Multi-talented pop-rock ‘n’ roll band Hello Sister is a dynamic trio from Orlando, Florida. Driven by three teen siblings’ spirited chemistry and authentic homegrown musicianship, Grace, Gabriella, and Scarlett Mason’s collective love of music are inspired by their father Tim, a Pop R&B songwriter who charted songs on Billboard in Canada and Europe. All girls are musicians and songwriters poised for long-term career success. Hello Sister has successfully garnered worldwide attention by way of their charismatic social media streamed shows from their rapidly growing base of fans and followers. With a large catalog of original high energy songs already released, these teen girl rockers have drawn musical inspiration from a diverse group of legendary music artists like Johnny Cash, Taylor Swift, Prince, Keith Urban, Avril Lavigne, Luke Combs, Shawn Mendes, Norah Jones, Selena Gomez among many others! Hello Sister recently released their first-ever NFT (https://bit.ly/3vgI6fy), with a limited-edition remix of their hit song “Wave of LOVE” on Rarible.com making them the youngest music artists known to release an NFT.