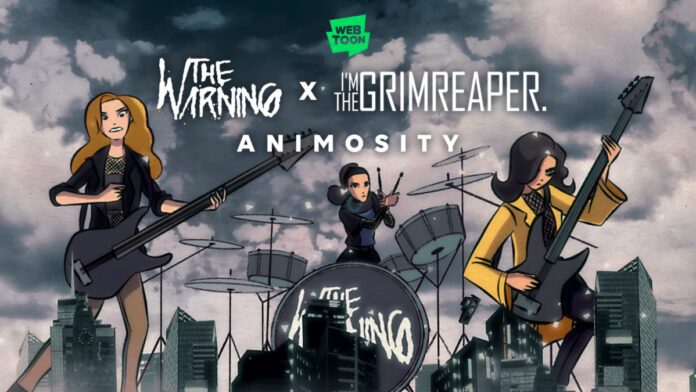 LOS ANGELES (December 2, 2021) – Leading webcomic platform WEBTOON® has partnered with hard rock sister trio The Warning for a visually-stunning video take on “ANIMOSITY,” a song from their recently-released MA​YDAY EP, inspired by the popular webtoon I’m the Grim Reaper.

The music video layers lead singer Daniela “Dany” Villarreal’s fiery vocals, Alejandra “Ale’s” thrashing guitar, and Paulina “Pau’s” thunderous drums over scenes from the hit webcomic I’m the Grim Reaper, a series that follows the adventures of Scarlet, a young woman who dies and is delivered down to a fiery underworld, where she is given an entry-level job as the Grim Reaper. It’s the perfect marriage: a punk-tinged song about deep resentment soundtracking a protagonist tasked with harvesting the souls of some of the worst people on the planet.

“‘ANIMOSITY’ is a song about holding a strong resentment towards a person who hurt you and how that can emotionally affect you,” said the band of the inspiration behind the track. “We are avid anime fans, so it’s really exciting for us to creatively partner with the ‘I’m A Grim Reaper’ WEBTOON® series.”

I’m the Grim Reaper, created by illustrator, writer, and comic artist Graveweaver, is one of the most popular series in the supernatural genre on WEBTOON®, with 1.6 million subscribers and a 9.8 rating.

This partnership with WEBTOON® is the latest in an exciting series of events for The Warning. The Monterrey, Mexico-based trio, who have drawn wide acclaim from media including Loudwire, Rolling Stone and Rolling Stone Mexico, and Billboard Argentina, also drew the attention of Metallica. The band’s new cover of the classic “Enter Sandman,” recorded alongside singer-songwriter Alessia Cara, was featured on The Metallica Blacklist album, the 30-year anniversary reissue of Metallica’s iconic self-titled 5th album. The Warning has released videos for a number of songs off of the MAYDAY EP, including “CHOKE,” which quickly racked up over a million streams upon its release; “EVOLVE,” the powerful second single; “MARTIRIO,” recorded in the band’s native Spanish, and the fiery “DISCIPLE.”

The Warning join a growing list of artists whose musical creations have been given the WEBTOON® treatment, following previously launched collaborations with platinum-certified singer-songwriters Jeremy Zucker and Chelsea Cutler, James TW, and others.