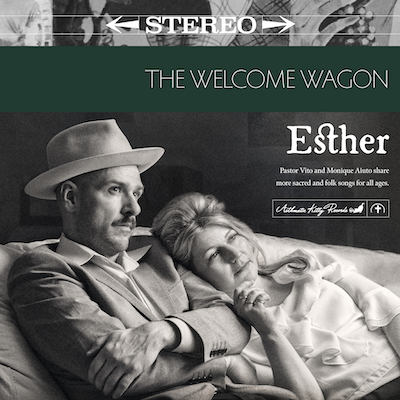 November 4, 2022 , Brooklyn indie folk duo (Vito Aiuto and Monique Aiuto) The Welcome Wagon are thrilled to release their new album Esther that is out now via Asthmatic Kitty Records and featured on Wonderland Magazine.

Esther is the fourth full-length album from the Welcome Wagon as they return to Asthmatic Kitty Records, the label on which they began their musical journey. Fittingly, it is a record that explores the idea of home in all its beauty and complexity. It is as much about homecoming as it is about making peace with—and a home in—uncertainty. The project had its beginnings in the summer of 2017, when the family took a two-month sabbatical to California. Shortly after returning to Brooklyn, Vito found himself holding his guitar and allowing his fingers to play a few notes that just felt…right. Then the pandemic hit, and Vito’s strumming, lyrics, and thoughts became the soundtrack of the family’s lockdown lives.

Earlier this week, The Welcome Wagon premiered their “”Halloween, Thanksgiving, Christmas, Record-Release Special!” Filmed in a retired Lutheran chapel somewhere in the swamps of Jersey, the special features songs from the duo’s new album ‘Esther,’ plus one classic. Surrounded by friends and family, Monique & Vito are joined on stage by a host of talented musicians – plus a few special guests!

The band also released a video for “Matthew 7:7,” directed by We Are Films, on Oct 12. Watch that video here: https://www.youtube.com/watch?v=WkzuYvSfBEg

Esther is The Welcome Wagon’s fourth album and is part of an ongoing audiovisual collaboration between Monique and Vito. Monique has made a painting to correspond to each of Vito’s songs on the album, three of which are featured in the album’s artwork, with a limited edition print of the piece “Isaiah, California” available as part of a special LP bundle.

Esther was born out of this wellspring of creativity and homecoming, exploring the profound knowing and equally profound mystery in both family and faith. In Esther, the questioning is the destination, and it is one where peace can be found and home—and art—can be made. There’s a salve there. There is music. There are moments of grace, large and small. Welcome.

Esther is available everywhere at: http://lnk.to/WWEsther