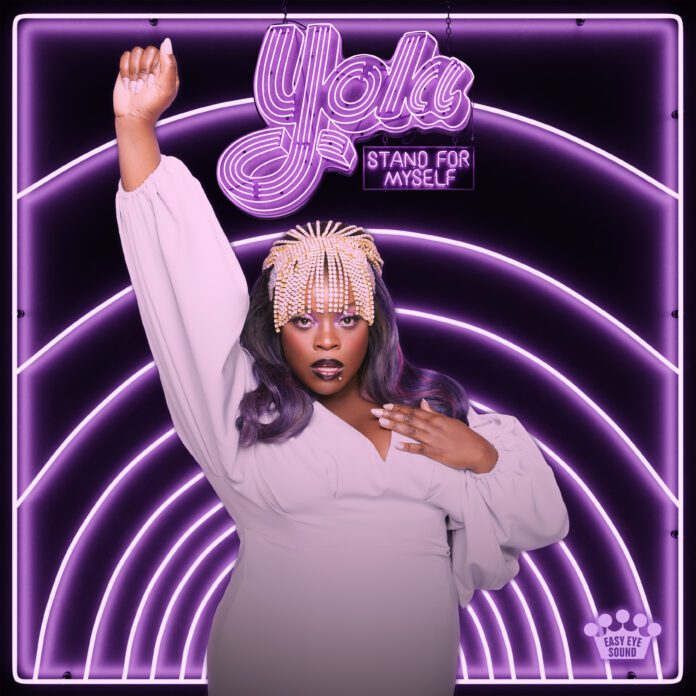 STAND FOR MYSELF IS OUT NOW,
VIA EASY EYE SOUND
https://click.ees.link/standformyself

Reflecting on the nomination, Yola stated, “To be nominated for two GRAMMY awards for this album, which is truly a personal story of agency, self-actualization and challenges tokenism and bigotry, is more than anything I could have hoped for. I feel seen by the music community and so grateful for this significant acknowledgement. Thank you to Dan Auerbach, all of the writers and musicians and my incredible team for helping me put this album into the universe during such a challenging time in the world, and I’m so happy to see such deserving and incredible talent nominated alongside me. See you in January! “

Next year is slated to be a banner year for the singer-songwriter. In early 2022, Yola will headline a major US tour spanning more than 40 dates in support of Stand For Myself, including two nights at Nashville’s historic Ryman Auditorium. She also recently announced an exclusive UK headline show at the legendary London venue KOKO on July 20, 2022.  Yola also features as Sister Rosetta Tharpe in Baz Luhrmann’s film Elvis set for release June 24, 2022, which explores the life of Elvis, played by Austin Butler, alongside Tom Hanks, Kelvin Harrison Jr and Alton Mason.

Yola’s standout performances this summer included becoming one of the few artists to perform at both Newport Folk and Newport Jazz Festivals in the same year. She also made her Red Rocks debut, and is opening for Chris Stapleton on his rescheduled tour in 2021, with dates which included Madison Square Garden and two upcoming sold-out shows at Nashville’s Bridgestone Arena. Yola recently performed on The Late Show With Stephen Colbert and joined Mickey Guyton for a roof-raising performance of Guyton’s track “Remember Her Name” at the CMT Artist Of The Year Awards in Nashville.

Yola’s anthemic sophomore album, Stand For Myself, was released July 30 2021. The album was hailed as a sonic shift by publications including NPR’s All Songs Considered, who anointed the album, “the best soul record of the last 20 years.” Entertainment Weekly praised Yola’s vocals, stating they “recall the poise and grandeur of music’s greatest vintage pop singers, from Dusty Springfield to Shirley Bassey,” and The Atlantic declared it “a ferocious anti-apathy testimonial.”

Stand For Myself is a sonic mix of symphonic soul and classic pop tracing a musical thread to Yola’s most eclectic musical inspirations. It declares that it is only when we stand for ourselves, and acknowledge our complexity, that we can be truly alive. Some songs began in the twilight hours of Yola’s pandemic isolation, reflecting on her personal and our collective moments of longing and awakening. Other songs germinated years ago and were inspired by personal moments, including “Break The Bough”, which Yola started to write following her mother’s funeral. Tracks were also co-written with Ruby Amanfu, John Bettis, Pat McLaughlin, Natalie Hemby, Joy Oladokun, Paul Overstreet, Liz Rose, Aaron Lee Tasjan, Hannah Vasanth and Bobby Wood. Recorded at Easy Eye Sound studios in Nashville, during the fall of 2020 with a rhythm section that includes bassist Nick Movshon, noted for his work with Amy Winehouse and Bruno Mars, alongside drummer and rising solo artist, Aaron Frazer.