Yola’s breakout debut Coachella performance last weekend drew high praise from publications from Rolling Stone, calling it “one of the most soulful sets of the weekend” to Variety, and she will once again perform on Sunday, April 24 during Coachella’s 2nd weekend.

The Black British genre-fluid superstar will also perform at Stagecoach Festival, on May 1, becoming one of the few artists to perform across both events held in the Coachella valley, marking Yola’s continued rise.

This summer Yola will perform at festivals including Bourbon and Beyond, Telluride Jazz Festival,  Rocky Mountain Folks Festival, and FreshGrass in North Adams, MA, and then the Stand For Myself 2022 headline tour will continue, this fall with shows at venues across the US, including Chicago’s landmark Thalia Hall, New York’s Webster Hall and Washington, DC’s Lincoln Theatre. Tickets on sale now.

Yola achieved another breakout year in 2021, which included show stopping performances at Newport Folk and Newport Jazz, her Red Rocks debut, extensively toured the US with Chris Stapleton including performances at Madison Square Garden alongside the release of her anthemic sophomore album, Stand For Myself, which was twice GRAMMY-nominated, making her a six-time GRAMMY nominee.

Stand For Myself drew widespread critical acclaim from publications including The New York Times who stated it is an, “‘Album made on her own terms.” and All Songs Considered, who anointed the album “the best soul record of the last 20 years.” Yola recently performed on The Tonight Show with Jimmy Fallon and appeared on CBS Mornings interviewed by Anthony Mason.  For more information and tickets please visit: www.iamyola.com 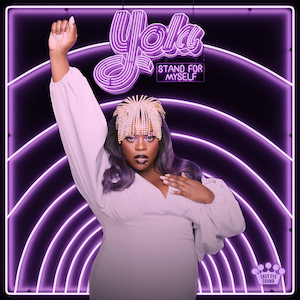