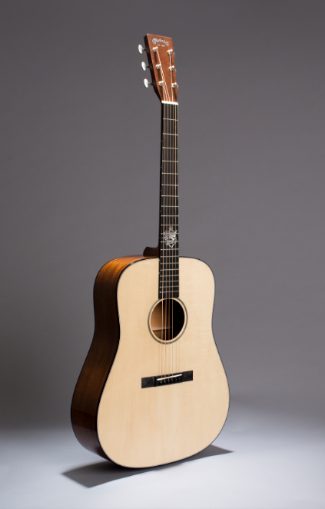 Grammy award-winning artist, Jason Isbell, just released his new album The Nashville Sound, reuniting him with his band the 400 Unit. At no surprise to his many fans, The Nashville Sound, lives at No. 1 on the Top Country Albums chart this week and at No. 4 across all genres on Billboard 200.

Isbell is no stranger to chart topping albums or fine guitars. He already owns a Custom D-35 and two guitars from the Authentic series, a D-18 and an OM-28. “Both of those I take on tour pretty much all the time. I fly with them, and they hold up great. I love those guitars. I think they’re incredible.” Isbell also uses Martin strings, which he says are also great for the road. “I’ve never had any problems with them breaking or slipping out of tune. They usually hold up for quite a few shows.”

Isbell worked closely with the Custom Shop at Martin Guitar to design his new signature D-18. The model boasts a pre-aged Vintage Tone System (VTS) Adirondack spruce top, mahogany back and sides, and rear-shifted scalloped bracing which produce more natural volume and a clear powerful tone. Similar to Martin’s Authentic series, Jason’s Custom is constructed using hide glue, which unlike newer synthetic reproductions, dissolves into the grain of the wood and creates more resonance throughout the instrument.

“For all intents and purposes, it’s going to be real similar to the Authentic series, which I like a whole lot,” Isbell says. “Those guitars are great, I think about as good as you can get. I’ve been taking that D-18 Authentic on the road for the past couple of years and have just really fallen in love with it.”

Isbell added a personal touch by adding an inlay of one of his tattoos at the twelfth fret. He also chose a thin finish and left off the pickguard – both design details that have one common goal – to make it loud.

“Growing up with my granddad and his brothers and their Martins, whoever had the loudest guitar always had the best,” Isbell says. “So I wanted to make the loudest D-18 we could make.”

Further details on the D-18 Jason Isbell and other models that will be featured at Summer NAMM, please visit www.martinguitar.com/new