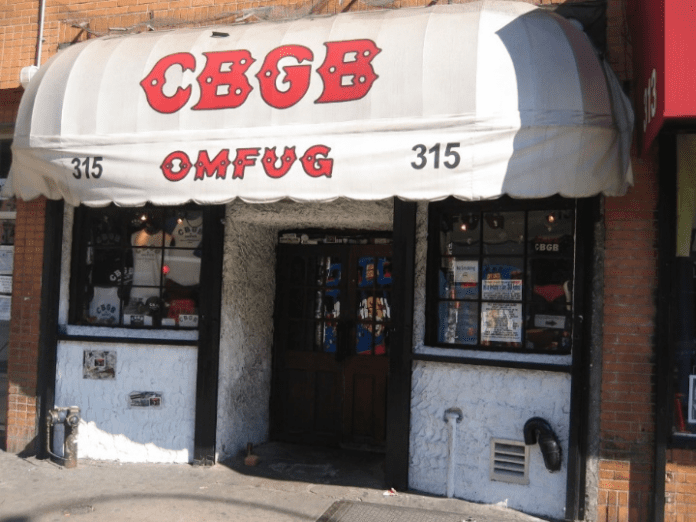 One of the most well-known music venues in New York City was CBGBs, located on The Bowery in the East Village section of Manhattan. Formerly a biker bar and dive bar opened in 1973 by Hilly Kristal, the venue became the center of the punk rock universe, a staple among fans. The name originated from the music genres country, bluegrass, and blues (hence CBGB), three genres you would not have associated with this dark and seedy punk palace with its infamous bathroom.

As punk was exploding in New York in the seventies and eighties, it needed a home. Many mainstream venues would not welcome punk and its rebellious ways into their place of business, but Hilly Kristal was not afraid to take a chance, having been involved in the industry for years.

CBGBs quickly gained its reputation as the place to play for upcoming bands, especially in the punk and new wave scene.

Unfortunately, after thirty-plus years of making noise, CBGBs finally closed its doors in 2006 when its lease was not renewed after an outdrawn rent battle, and the club that changed the landscape of punk rock in America was silenced.

The venue’s spirit still lives on, and the folklore of the bands that performed there will never die. Over the years of its existence, CBGBs hosted some of the biggest names in music. Everyone from the Ramones to the Police and the New York Dolls rocked the house on their tiny, rickety old stage. But we are here to talk about several of the women that dominated the scene. CBGBs was an inclusive place—while many aspects of the music industry were very male-dominated, at CBGBs, you left your prejudice at the door. Anyone who entered was equal. Everyone who dared to get up on that stage and rock was idolized.

Some of the biggest female stars that graced their stage showed the audience that women can indeed rock just as hard, if not harder, than anyone else.

Technically, Debbie Harry is not a guitar player, but Blondie cut their teeth on the CBGB stage, and their early punk records are remembered as some of the best. They were a regular fixture on the CBGB circuit, and Debbie was often seen frequenting the bar hanging out with other NYC punk, early rap, and street art royalty, including painter Jean-Michel Basquiat. Blondie’s support slot with Johnny Thunders’ post-New York Dolls group The Heartbreakers was pivotal in CBGB history.

Patti Smith was there at the beginning, and she was there at the end. One of her first-ever recorded concerts took place in CBGBs in 1975 with the band Television. Patti was relatively unknown at this point, but she went on to take the scene by storm with her unique fusion of rock and poetry.

Patti Smith, with her band, played the final ever CBGBs show to take this journey full circle. She helped put it on the map, and when the club came to an end, she gave it the send-off it deserved with a blistering three-and-a-half-hour-long set, ending with the song “Elegie” (from her classic album Horses) where she read the names of departed and beloved artists—from the scene.

Joan Jett / the Runaways and the Blackhearts

No stranger to the CBGB stage, Joan Jett first cut her teeth there in 1976 with the Runaways in some of their earliest shows. Once the Runaways career faltered, Jett was back on that stage, but this time under her own name with the Blackhearts. She had returned to set the world on fire and earn her crown as the Queen of Rock with her monster hit, “I Love Rock’ n’ Roll.”