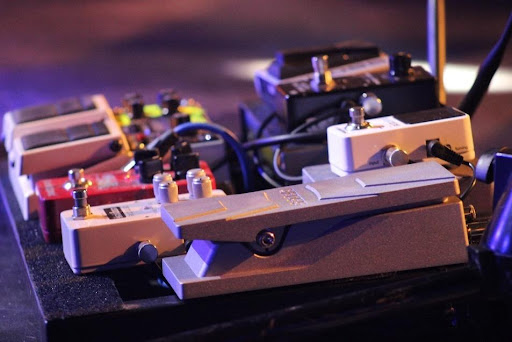 You want your guitar to wail the blues? To cry out the despair and agony in your broken heart while standing in the cold, cold rain on a dark, lonely night ‘til the break of day? The blues greats of yesteryear felt the same way and were able to capture that soulful, deep down tone on record.

So, you ask, how can I, a mere Earthly mortal, rise to the heights of amazing blues tone? Well, I’m glad you’ve asked, as you’ve come to the right place. Here at Guitar Girl Magazine, we’ll help you get a deeper perspective of the blues as we take a look at some of its inspirational players and recognize some of its ingredients.

Now before we get down to the nitty-gritty, it goes without saying that there is absolutely no substitute for the “magic is in the hands” with the obligatory woodshedding, knowing your craft, and paying the blues dues (shake your hands back in forth in the air in the customary jazz hands motion). Also, there’s no experience like being in the midst of a get-down blues jam session at your late-night local honky tonk. In Atlanta, there’s Blind Willie’s Blues Club, Fat Matt’s Rib Shack, and Darwin’s Burgers and Blues when you’re looking for a double shot of that wicked mojo. Years ago, I was at Blind Willie’s having drinks with some friends, and the guitar player was tearing it up in a downright righteous way, so I had to ask who it was…it was Beverly “Guitar” Watkins, who’s in her 70s and playing like the only way to get her anguish out was through her guitar.

Now to really get to know the blues, you want to start at its beginnings, and who better to introduce you to the blues than with the Godmother of Rock ‘n’ Roll herself, Sister Rosetta Tharpe (March 20, 1915 to October 9, 1973). I’m always amazed that there are not volumes written about her and numerous monuments erected in her name as she served as an inspiration to many of the greats (Little Richard, Johnny Cash, Carl Perkins, Chuck Berry, Elvis Presley, and Jerry Lee Lewis to name a few). Open your ears and welcome into your heart her soulful servings of “Down By the Riverside” and “This Train” as examples. Her blues are gospel and vice versa. You get your churchin’ and blues all at the same time. You’d be hard-pressed to find a better starting place for your blues journey.

Getting back to how YOU can find your blues tone, while you have to look at your whole guitar rig, we’re going to focus on three effects pedals because they can have a big impact on your tone with relative ease and at a reasonable cost.

We’ll start with the best-selling pedal of all time, the Ibanez Tube Screamer. Released in the late 1970s, it has gone through many versions, but they all have the signature Tube Screamer tone (TS808, TS9, TS9DX, TS5, TS7, and TS10). It shines at pushing your guitar’s signal into a blissfully beautiful and warm clipping (aka overdrive) and drives your guitar amp with a louder, grittier, and warmer tone with a mid-range boost which has graced countless recordings. Essentially everyone has used one at one time or another, but some notable players associated with it are Nancy Wilson, Joan Jett, and Stevie Ray Vaughan. If I could only have one pedal, it would be a Tube Screamer. Most honorable mentions go to the BOSS SD-1 Super Overdrive as its circuit is very similar to the Tube Screamer’s, and the BOSS BD-2 Blues Driver as it’s another exceptionally sweet-sounding blues pedal.

Next on our list of prime suspects would be the ubiquitous Dunlop Cry Baby Wah pedal which allows you to vary which frequencies are boosted with its rocker foot pedal. Making its debut in the late 1960s, this is another iconic pedal that seemed to be used by almost everyone in nearly every style of music. It was originally made to imitate the crying of a muted trumpet but came into its own right as a tone-shaping tool. The most popular modern model is the GCB95 but there are a number of variations like the signature models, all of which give you the ability to add its “bow chicka wow wow” flexible sonic expressiveness to your tone. Orianthi puts hers through the dirty blues paces on her soloing on “You Don’t Wanna Know.” Ana Popovic burns the house down with hers on the Hendrix cover of the same name. An equally iconic wah is the Vox V847 which has its own cult following.

Finishing out the trilogy of pedals for superior blues tone is the Electro-Harmonix Holy Grail Reverb. Very briefly, reverberation (aka reverb) happens naturally as it is created when a sound is reflected off surfaces, but luckily it can be created with spring, analog, and digital reverb units, and it adds a sense of space and depth to your tone, so it’s like the cherry on top of your hot fudge sundae as it adds the finishing touch to your awesome blues tone. Kathy Mitchell, Queen of Surf Guitar, makes excellent use of reverb in her work with Eddie and the Showmen, the Blazers, and others. You may remember the furious surf guitar in Pulp Fiction (“Misirlou” by Dick Dale). I once had the honor of playing a show with Dick Dale, and he suspends his trusty Fender 6G15 reverb unit from a ceiling rafter by a rope so his reverb is pure. It’s also safe to say that Debbie Davies and Pink Floyd put reverb to good use. Another recommended contender for reverb is the BOSS RV-5.

Admittedly not a guitar effects pedal, but a guitar slide can give your guitar yet another voice to sing those blues in a most emotional way- Bonnie Raitt would agree.

To wrap it up, your guitar tone is about as personal as it gets as it exudes from you. Tone mining for a satisfying blues tone can take some time but is a worthy pursuit. Feeding your mind for a good understanding of its roots is where it starts. Seeing it live helps you soak it in to become a part of you. Next, having a few top-performing pedals up your sleeve will give you the tools to have your guitar emotions take shape. Lastly, with all the pieces in place, is to get you to dig deep into your soul to let your blues tone flow through you to soar with the greats…your stardom awaits.

Learning on an Acoustic Guitar vs. an Electric – Does it Matter?

The Basics: Parts of the Guitar