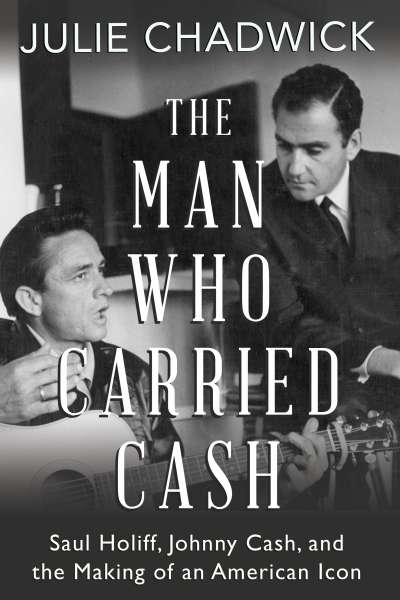 Author Julie Chadwick has written a book that is interesting on multiple levels: First, this is book about Saul Holiff, a man from Canada who became the Manager of a Man from Arkansas, and second, it’s about a singer, songwriter, and an actor who became an American icon.

On two different parallels, you have two individuals who had rough childhoods whose fathers were abusive and dismissive, and somehow these two lives intertwined and became a team that would become legendary.

The Prologue ironically depicts Saul’s gruesome suicide which sets a riveting tone for what was to follow in this compelling story. Then the story unfolds taking the reader through the early years of Saul, how at an early age he joined the Royal Canadian Airforce after which he took a gamble with $10.00 in his pocket to go to Hollywood to pursue his interest in becoming an entertainment agent.  After failing at that endeavor, he returned to Canada to open a men’s clothing store which led him to opening a restaurant.

After building a name for himself as a successful business man, he was able to recapture his dream of becoming an agent at the local level for aspiring entertainers and this set the stage for Saul to meet up and work with the iconic country singer he ultimately carried to and through success for many years.

On a third level, and what makes this so interesting, it was the drug use, greed, and arguments that ended this team after 13 years. While there were many highlights, to be sure, there were just as many lowlights which proved to be too much for this team to endure.

I found this story to be a steady read with a wealth of information, much of which was obscure but very well documented; and it was definitively a learning experience for a child of the ‘60s who lived through the good old years and only saw the bright lights and heard the unique sound of this great country music story teller.

In my opinion, Chadwick’s book is a must read regardless of your musical taste because it so powerfully illuminates the behind the scenes turmoil and dysfunction of what both men went through and yet were still able to deliver a product that the world so loved. The aforementioned icon that Saul managed to greatness was none other than Johnny Cash.

The unlikely, rocky relationship between an American country superstar and his straightlaced Canadian manager.

Before there was Johnny and June, there was Johnny and Saul. The Man Who Carried Cashchronicles a relationship that was both volatile and affectionate between Johnny Cash and his manager, Saul Holiff. From roadside taverns to the roaring crowds at Madison Square Garden, from wrecked cars and jail cells all the way to the White House, the story of Johnny and Saul is a portrait of two men from different worlds who were more alike than either cared to admit.

Saul handled the bookings and the no-shows, the divorce and the record deals, drugs, overdoses, and arrests. He was there for the absolute worst of times, but also for the best: Carnegie Hall, Folsom Prison, “A Boy Named Sue,” and Cash’s hit television series. But in 1973, at the zenith of Cash’s career, Saul quit. Until now, no one knew why.

Julie Chadwick is an award-winning journalist and editor whose work has appeared in the National Post, Vancouver Sun, Victoria Times-Colonist and Vice. A passionate urban farmer she is also a field reporter and editor at MaximumYield.com. She lives in Nanaimo, B.C.

Disclaimer:  Guitar Girl Magazine is a participant in the Amazon Services LLC Associates Program, an affiliate advertising program designed to provide a means for sites to earn advertising fees by advertising and linking to Amazon.com. Additionally, we participates in various other affiliate programs, and we sometimes get a commission through purchases made through our links. You will pay the same price through these links as you would if you went directly to the site. This keeps us bringing you great content for no charge!