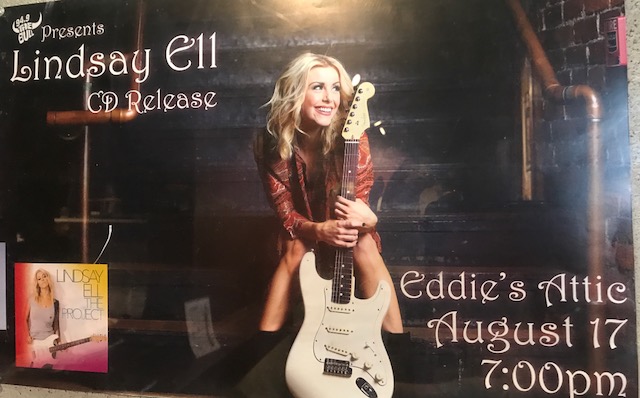 Rising country music artist Lindsay Ell released her debut album The Project on August 11 via Stoney Creek Records.  Produced by Grammy-winner Kristian Bush, the album contains 12 songs which Ell describes as “…the best I’ve ever done.  I called the album The Project because that’s exactly what this whole process was. I’ve discovered who I am, what I want to say and how I want to say it. I’m so excited to finally have an album that is me, and I can’t wait for fans to hear it.”

Atlanta fans were fortunate that Ell chose Eddie’s Attic to hold her CD Release Party.  Accompanying Ell on stage for several songs was her producer and Atlanta resident Kristian Bush which Ell graciously credited with helping her find herself and her music through the production of The Project.

For those familiar with the iconic, quaint venue in Decatur, GA, Eddie’s Attic has hosted many great artists and is known for its “Listening Room” making it a perfect venue for the evening’s performance.  Making it even more special, Ell and Bush told the crowd that the album was produced in Georgia just a block from the venue with people that live just blocks away. 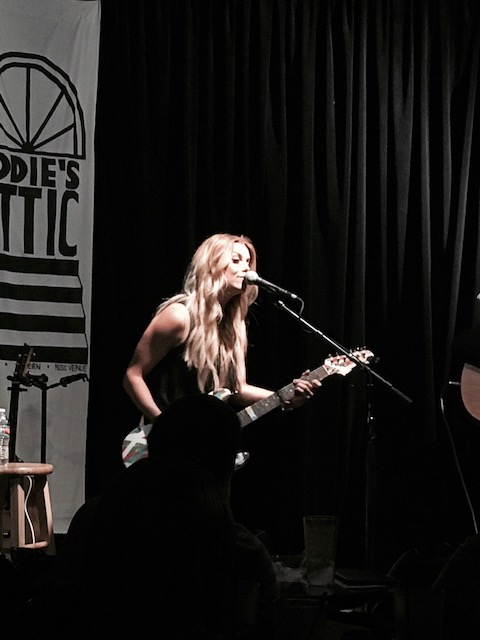 The evening was sponsored by local Country radio station 94.9 The Bull and while she’s touted as a country artist, to me her music is filled with more of a blues overtone.  While the songs on her CD are bluesy with a touch of pop, her performance tonight was raw and stripped down- just her emotional and sweet, but sometimes gritty at just the right spots, voice while performing on her guitars; switching between her hand-painted electric Stratocaster guitar named after the single from the album “Waiting On You” and her Martin acoustic.  Other songs for the evening included “Castle,” “Stop This Train” (a John Mayer cover), a beautiful, heartfelt performance of “Space,” and the ever popular “Criminal.”

The audience was treated to the spontaneous arrival of Kristian Bush who joined Lindsay on stage to talk about the recording of The Project and perform a few of her songs.  “Champagne” featured Lindsay on electric and Kristian on acoustic and tells the story of how a woman wants to be treated, followed by “Wildfire” which Lindsay said was a song that was written while in the studio.  Kristen then launched into a song which he described as “talking you out of being my girlfriend.” 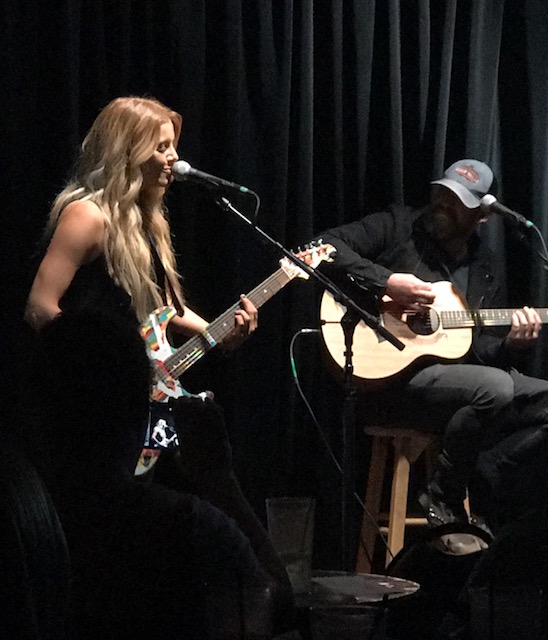 Lindsay Ell is such a talented young lady whose humble and sweet personality, combined with her infectious smile, draws the crowds in.  She graciously greeted fans after the performance for photos and autographs and actually took the time to talk with the fans and genuinely was appreciative of their support.  She is busy touring and promoting the new music and will be visiting cities in Canada and the U.S. before heading to the UK, Ireland and across Europe in the coming months.

I highly recommend The Project and if Lindsay Ell is coming to a town near you, go check her out.  She is definitely an artist to watch in 2017 and beyond!

Named one of CMT’s Next Women of Country, Lindsay Ell is a triple threat: accomplished musician, unique vocalist and songwriter. The 26-year-old Calgary native learned to play guitar while traveling with her father to country-bluegrass camps as a young girl. Ell honed her craft as a musical stylist and songwriter after being discovered by BTO and The Guess Who’s Randy Bachman (“American Woman” / “Taking Care of Business”) who discovered her at the age of 13. The multi-instrumentalist was soon opening for the likes of Luke Bryan, Buddy Guy, The Band Perry and Keith Urban. The Stoney Creek Records artist has been called “a true triple threat” by Guitar World; “a star in the making” by Taste of Country; “Your coolest new girl crush” by Teen Vogue; and “a distinct figure in the modern country recording camp” by NASH Country Weekly. Ell received critical acclaim for her singles “Trippin’ On Us” and “Shut Me Up” including being named one of Rolling Stone’s “10 Artists You Need to Know.” Ell’s new single, the spirited and up-tempo “By the Way” is available now.

GRAMMY-winning recording artist Kristian Bush has been leaving his mark on music for more than two decades. The singer, songwriter, producer and multi-instrumentalist started his career with folk-rock duo Billy Pilgrim in the early ‘90s; in 2004, he exploded onto the country music scene with Sugarland, surpassing sales of over 22 million albums worldwide, achieving five No. 1 singles and winning numerous awards, including GRAMMYs, AMAs, ACMs, CMT Music Awards and CMAs. In 2014, Bush made his solo debut with Top 20 hit “Trailer Hitch,” featured on his critically-acclaimed album SOUTHERN GRAVITY, which COUNTRY WEEKLY named the “feel-good album of the year” and ROLLING STONE named one of the Top 10 country albums of 2015. He wrote and performed “Forever Now,” the theme song to TLC’s hit reality series SAY YES TO THE DRESS; his songs anchor the world premiere of TROUBADOUR, a musical set in 1950s Nashville, which debuted at Atlanta’s Alliance Theatre Center in January 2017; and he recently won raves for producing Lindsay Ell’s debut EP, WORTH THE WAIT. Currently signed to Wheelhouse/BBR Music Group, his latest single, “Sing Along,” is at radio now. For more information, visit www.kristianbush.com.

Disclaimer: Guitar Girl Magazine is a participant in the Amazon Services LLC Associates Program, an affiliate advertising program designed to provide a means for sites to earn advertising fees by advertising and linking to Amazon.com. Additionally, we participates in various other affiliate programs, and we sometimes get a commission through purchases made through our links. You will pay the same price through these links as you would if you went directly to the site. This keeps us bringing you great content for no charge!