The Shaky Knees festival held in Atlanta, Georgia earlier this month had a variety of artists and musicians grace their multiple stages. The Irish band Flogging Molly, native North Carolinian Ryan Adams, and Aimee Mann’s band The Both, were just a sampling of the talented line-up for 2015. This year’s music came from all different genres – rock and roll, blues, country, folk, Americana, and even reggae — all of whom rocked and had audience members smiling and shaking!

Atlanta, Georgia is known as a city with talented musicians, great music venues and top rate festivals; and this year, the Shaky Knees Festival brought in some of the hottest talent in music today making for an entertaining weekend and overall successful festival.

The Both, featuring the ever-talented and legendary Aimee Mann, along with fellow member Ted Leo, took to the stage with the hot sun beating down on festival goers and did not disappoint. The performance, along with the backdrop of the Atlanta skyline, was picture and “sound” perfect and drew a great response from the crowd. From beginning to end, they were wonderful and it was amazing to see them performing live together. I actually think they are one of the most talented duos around in today’s music scene. If presented with a chance to see them perform, take it! They began performing together in 2013 and I hope will continue to perform for years to come.

Flogging Molly is an iconic band from the Emerald Isle and drew cheers from the crowd when taking the stage. They are one of those bands that bring incredible energy to their performance and have for decades. A huge emerald green shamrock, traditional for the “Luck of the Irish,” was proudly displayed on the backdrop behind the band and magically added to their Irish flair as they rocked the Shaky Knees audience. This is what rock ‘n’ roll is all about — a good band having a blast entertaining the crowd. For me, Flogging Molly’s performance was one of highlights from the festival and will be a great memory. Mark that off my bucket list.

One of the festival’s headliners was Ryan Adams and I can say, no one performance of his is ever the same. Sometimes he blows up, while other times he is just so cool and collected on stage. Needless to say, his performances are emotional and energetic and that is what is so amazing about seeing him live! He performed on the last day of festival, which also happened to be Mother’s Day. He made it special by wearing a Misfits t-shirt and performing a remake of the song “Mother” originally by Danzig and it was incredible. This was one of the best moments of the weekend, since it was an unusual song for Mother’s Day, but nonetheless spectacular. The audience soaked it all in that evening while Adams belted out his songs with such an emotional tone all set amongst the majestic evening Atlanta skyline.

Shaky Knees knocked it out of the park in 2015. The variety of music genres that were brought together is a great way to attract large audiences to a festival. This is one festival goers will want to go back to year after year, given the great performances from talented artists like the three mentioned above … and more. It’s a great festival to attend and will definitely become one of Atlanta’s premiere festivals. 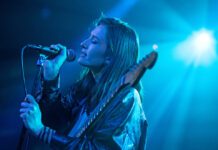 Caroline Loveglow performed at Neumos on May 21, 2022 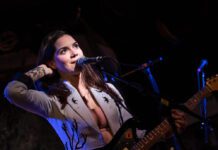 Kayleigh Goldsworthy performed at Chop Suey on May 12, 2022