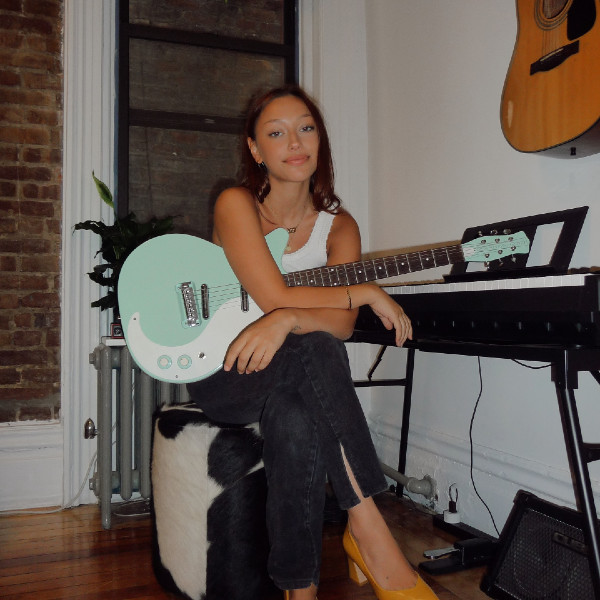 Renata Baiocco is one-half of New York’s indie-pop duo MIDLO, who, along with partner Dan Middleditch recently introduced the music video for “Waste Your Time,” following on the heels of their previous hit, “Emotional.”

“Emotional” has collected over 1 million streams on Spotify, while “Waste Your Time” has already transcended 100,000 steams.

Gifted with a crème de la crème voice capable of everything from bubbly pop effervescence to smoldering sensuous textures, Renata has it all: talent, presence, charisma, and ‘the look.’

Guitar Girl Magazine caught up with Renata Baiocco to find out more about the individual behind the gorgeous voice.

I always loved music, I went to a high school with a very nice music program and that was really where I started to fall in love with singing. I also grew up playing piano and the guitar from a young age so music was already integrated into my life and later on I picked up the ukulele. I feel like my a-ha moment when everything just clicked and I realized music was what I wanted to do was when I was around 16 and I met this guy in high school who was also into music and we started dating. He was my first love and when we broke up I was devastated. It was my first real experience with heartbreak, and I didn’t know where else to turn but music. I wrote a song about him over the summer when I was working at a sleepaway camp and performed it for everyone, and that song is really where it all started. I knew after that, that singing and songwriting were going to be a huge part of my life.

What singers/musicians influenced you the most?

Amy Winehouse and The Ink Spots have always been my biggest musical inspirations. I aspire to make music that has the raw transparency that Amy’s songs have with that sultry feel. Her music just speaks to me on such a deep level, she makes it so easy to connect with the emotions in the songs through her lyrics and I remember when I first started listening to her how amazed I was at her music. The Ink Spots were a group from the 1930’s I was introduced to in high school and the music was just so beautiful I fell in love with them immediately. I’m such a sucker for lyrics. I literally get goosebumps from good lyrics. I come from a jazzier background as opposed to my musical partner Dan Middleditch who comes from a more rock and blues background, which is what I think makes us work so well together.

Bruno Major is really a big one for me right now. He is just next level good, but I’m listening to so many different people right now like Snoh Aalegra, UMI, Pink Sweat$. The list just keeps going. I love finding new artists. I recently came across this girl Nina Cobham and her song “Sola,” and I can’t wait to hear more from her. It’s crazy how many incredible artists are out there.

What is your songwriting process? Lyrics first, or music?

I’ll let you guys know when I figure it out, hahaha. It’s so up in the air for how I start a song. Sometimes I just get one lyric stuck in my head with no melody and then I build the entire song off that one idea. Other times I write a pretty melody with no words and I flesh it out from there. And then sometimes the lyrics and melody happen at the same time. The most important element to my songwriting process is that when I’m writing, I’m feeling emotionally inspired in some way or there has to be some story on my mind that I’m trying to tell. I write songs mostly about people. Once I met a guy I really liked and after only 2 days of knowing him, I wrote an entire song about him in 2 hours because I was just so inspired and had so many feelings I needed to get out. It’s crazy how it works really.

What inspired your new single/music video “Waste Your Time?”

Dan brought me into MIDLO after the initial writing had already started for “Waste Your Time.” This was the first song in our project that I co-wrote on, and when I first sat down to do so with Dan, he explained to me this whole crazy vision he had for the storyline; Basically two people existing in separate realities in the same space, with both characters in a failed relationship that really messed them up. They want to put themselves out there but they know they’re not ready and are thinking about what could have been if they actually were ready. Dan may tell it a little differently, but instantly I understood where he was coming from and the sentiment behind the concept. I think everyone has had that moment where something doesn’t go the way you think it will, and in your head, you play out every other possible scenario of what could have been rather than what actually happened. I have had so many moments like that, and together Dan and I converted that into a song we’re really proud of.

I have 2 guitars. I have an acoustic fender, which was the first guitar I ever got so I can’t part with it. I also have a Danelectro Stock 59 in aqua blue that’s literally my baby. When you see a guitar that’s meant for you, you just can’t not have it.

Have you made any special modifications to your guitar?

No, I haven’t made any special modifications to my guitar. It’s a pretty standard guitar but I bought it because I fell in love with it exactly the way it was.

How are you handling the coronavirus situation?

I think as a musician the coronavirus situation hit really hard. MIDLO had to cancel our debut tour just like many musicians in the industry. But in many ways, quarantine has really given me so much time to make more music and to teach myself how to become a better songwriter. It was a break from the convention of what I usually do. I was locked away in a tiny NYC apartment for a lot of it so I had a lot of time to do it and I’ve leaned on music to keep me sane during all of this. I feel lucky to have something like music where I can express my emotions and cope with such a big change in a healthy way. I’m a very positive person. I always find the good in everything and during the peak of COVID I was featured on a song by singer/songwriter Mikey Wax (who is a co-writer on all of MIDLO’s tracks) called “Stay Together.” The song talks about keeping a positive attitude during this whole thing. Music has the power to penetrate our emotions and make an impact whether we realize it or not, and it has a way of bringing people together. We all need to be here for each other during such a historical time and that’s what we were hoping to do with that song.

Looking ahead, what’s next for MIDLO?

Given the current state of everything, we’re taking it day by day just like everyone else, but MIDLO has a ton of unreleased music coming. We are also constantly working on writing new stuff, and Dan and I have a few fun things in the works. Since we can’t be out in the world performing, we want to do what we can to support all the change happening in the world, so we have MIDLO t-shirts available for purchase on our website and we are donating 100% of proceeds to the Black Women’s Health Imperative. Anyone reading this can grab one at WeAreMIDLO.