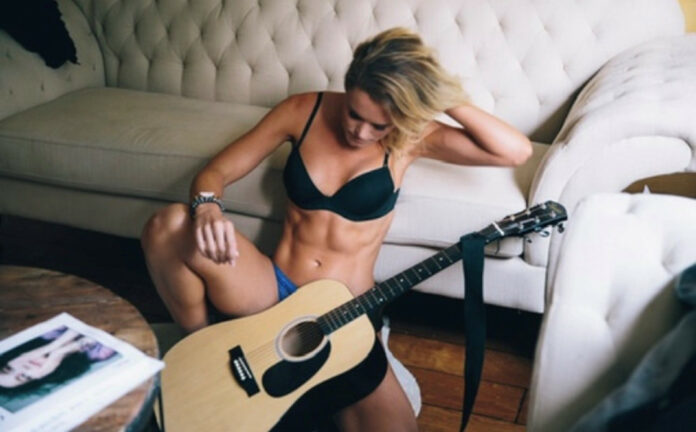 Singer-songwriter and actress Kelly Monrow recently released her new single/music video, “You’re The Reason I Drink,” a song inspired by going through an agonizing breakup last year. The song narrates not only the immediate heartache but also the journey of finding herself, healing and moving forward.

According to Kelly, “‘You’re the Reason I Drink’ is a cheeky song about celebrating how far you have come while getting over an ex.”

Originally from Texas, Kelly now splits her time between NYC and Nashville. During the pandemic, she discovered her musical muse. Since then, she’s released “Mama Said” and “I’m Alive,” followed by an EP, Pronoia.

In her other life, Kelly Monrow is known as Kelly Dowdle, the actress, whose roles in Billions, Lucifer, American Crime Story, and the forthcoming film Three Days Rising have made her a celebrity.

Guitar Girl Magazine spoke with Kelly Monrow to find out more about the person behind the music, her creative process, and what kind of guitar she plays.

My dog Cash is a Goldendoodle and my best friend. Human connection- my family and friends. My creativity – being able to create and write my feelings connects me to my most authentic self and it helps me get through anything in my life.

What inspired your new song/music video, “You’re The Reason I Drink?”

My ex sent me a text one night and all it said was “you’re the reason I drink” and I was actually in a writing session, so I decided to make a mockery of it and write a cheeky song about how happy I was that I wasn’t with him anymore haha.

The lyrics are a concept that always comes first; I will drop them down usually on the train, in a car, on a plane, or walking down the street and then later will build a melody to it or vice versa, or hear a melody, and random lyrics will just start flowing out of me. The next couple of songs I have coming out my producer Sinclair and I wrote in less than an hour. When it’s right, it’s easy.

I want my listeners to feel in their hearts and be moved hopefully by my lyrics. I want them to come back to a sense of belonging and to feel inspired or loved.

I’m still very new to the process considering I only started in music less than two years ago, but yes, my tone has absolutely changed, and I think it’s changed over time with the more confident that I’ve become. My voice is a bit more relaxed and may be richer as I’ve come to believe more in my own words.

I was in a slump during the pandemic. I guess I was a bit depressed and one night I went on a psychedelic journey with mushrooms and had a vision to start the singing process. and I saw myself recording and on stage so I decided to follow it and when I came out of that journey, I promised myself I would follow through on it.

I really love the Rolling Stones, Dolly Parton, and Stevie Nicks, and I grew up listening to my dad play Tears for Fears in the car, and Bono has been a huge inspiration to me over time.

I would say Taylor Swift always slays. Blake Shelton has really done well for himself and people like Dua Lipa who come on the scene strong, but I actually admire all the artists that don’t get a ton of attention but yet still are super consistent and super talented and might be playing in local spots for fewer fans. To me, those are the people that are really killing it.

You’re also known for your acting talent, having had roles in Billions, Lucifer, American Crime Story, Blacklist, and the upcoming film, Three Days Rising. If you had to pick either music or acting, which would win out?

I hope I never have to answer this question because to me they go hand-in-hand and I think the ideas an artist has may be both multi-faceted and multi-dimensional so hopefully, I’ll be able to keep creating my entire life, dabbling in both TV and film and singing and creating and writing, among many other things, so I can’t ever make a choice on that.

What are you looking forward to in 2022?

I have eight new songs coming out this year that I’m really, really proud of and that are a bit all over the map as far as genre, and I’m really excited to just keep sharing my heart with the world and hopefully create a Fanbase that is sustainable. I hope to have a very long career in music. To me, that is the essence of a successful artist.