Home Interviews Interview: I Am Night Opens Up About Boy Bands, Fender Guitars, and... 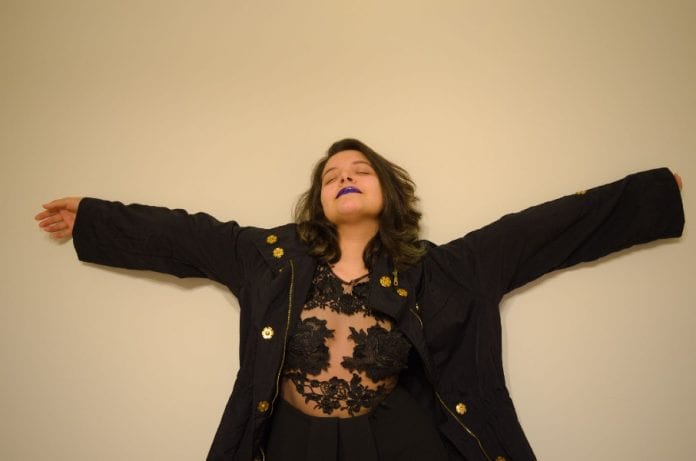 Talking about the EP’s genesis, I Am Night shares, “I honestly never thought this was going to be an EP. I was working 12-hour shifts at restaurants and just writing in my spare time. I would be washing dishes or buying groceries and just come up with random melodies or sentences that I instantly recorded on my phone.”

Originally from Brazil, now residing in Baltimore, both of I Am Night’s parents were performing musicians. By the age of 4, she was exploring the realm of music. Moving to São Paolo when she was 17, she studied music at UNASP, followed by relocating to Baltimore.

Encompassing five-tracks, Returning was produced by Jack Kilby and features the talents of Eliot Seppa (bass), Micha Robinson (keyboards, synths), and John Lee (guitar). Entry points include “Delayed Afterlight,” “It Is Me,” and “What Am I.” The latter song exudes delicious psychedelic of jazz amalgamated with nuanced layers of intoxicating alt-rock savors.

Guitar Girl Magazine caught up with I Am Night to discover more about her influences, her dream guitar, and what she’s working on right now.

No one ever asked me that before! I think it would be my boyfriend, music, and açaí bowls.

What inspired your new EP, Returning?

That EP was conceived after years of internal struggle about my own musical identity. I always knew I wanted to be a musician, but it took me so long to figure out what type of music I should do. I would always try to guide my ideas towards what I thought would sound artsy or hip. Like I needed the whole World to like what I was doing. This EP happened when I grabbed all of my unfiltered ideas and laid them out in the studio. I just ignored all these needs for external validation and spoke my mind. That’s why we have alternative rock tracks, jazzy bridges, sad progressive songs, and heavy vocals on this EP. Because I am all of this. This is the real me – not more, not less. Making this EP was the process of rediscovering myself, as an artist and as a person. It was the process of “Returning” to my own genesis.

Definitely harmony first. I place all the layers (drums, bass, synths) and work an entire song structure first, then try to come up with melody and lyrics later. That method works pretty well for me!

I do wish they get a message of hope and authenticity. That things are going to work out for them, eventually. Just be you and keep doing what you’re doing. This is the mantra I’m living for right now and It gives me a good amount of peace.

I play a Fender. I don’t know what it is about Fenders and their Johnny Marr/70s indie-rock sounds, but I absolutely love it.

It would be any guitar made by “Burls Art.” This guy has a YouTube channel where he makes guitars out of literally anything: pencils, epoxy, even jawbreakers candy. I’d have an entirely neon pink one, made out of rubber (if possible).

I try to keep up with mostly vocal exercises and music theory studies on a daily basis. I’m still deliberating whether I should really get into the guitar or the piano and become a really decent player. Maybe there is still time…?

I actually had the privilege to grow up when both of my parents were active touring musicians. I started to experiment with singing at the age of 4, and they kept taking me to open mic and live performance nights. When I was 9, my mom would take me to her Carnival Tours across Brazil as her backing vocal and my dad would take me to record vocals with prominent artists of my state on their albums. That led me to be a very active singer in my church during my teenage years until I moved to São Paulo at 17 and went to music school. In 2017, I moved to Baltimore with my family and here I am now, doing what I do best: music.

Paramore, Anberlin, Royal Blood, and Charlie Brown Jr. (Brazilian band) definitely inspired me as a composer. Hayley Williams and Morrissey are the two singers that I am the most influenced by, for sure.

I am really into J-Rock right now. More specifically, I am in love with liSA, Cö Shu Nie, and The Cabs. These guys are flat out geniuses and my current goal is to be able to reach any of these musicians or their producers to get a collaboration going. Wish me luck!

I never actually thought that much about it until I discovered Jacob Collier. When I first listened to one of his microtonal songs, I couldn’t sleep well for a week! Who would know it is attainable to work with foreign concepts such as microtones and negative harmony? It opened my eyes and made me realize that, in music, anything is possible.

I share every teenager’s week spot: boy bands. I just can’t help myself when NSYNC or Backstreet Boys start playing on the radio. I even caught myself falling for Kookie, from BTS the other day! Those boys know just how to entice you.

Well, for being young and female we gotta work twice as much as male artists. We are expected to explode on social media, to look cute and sexy, and to be pleasant girls to interact with. My advice is: don’t bother doing any of these things if you don’t want to. Let your music speak for you. If you truly believe in your art, let it prove itself to the world. You might not break into the mainstream for choosing to focus on your music instead of going viral, but at the end of the day, you’ll feel the pleasure of staying true to yourself.

Because it’s the only way I know how to communicate myself to the world. I gotta do something with all of the endless ideas that constantly pop in my head. And music is what I know how to do. It doesn’t matter if I get 1 million fans or just 1. I’ll never stop speaking my mind through music.

Hopefully, a full-length album in a year or so. I’m working tirelessly to bring some new songs to life. I can only focus on finishing this project and deeply hoping that you guys enjoy the work! But in the meantime, feel free to listen to “Returning” and let me know what you think!