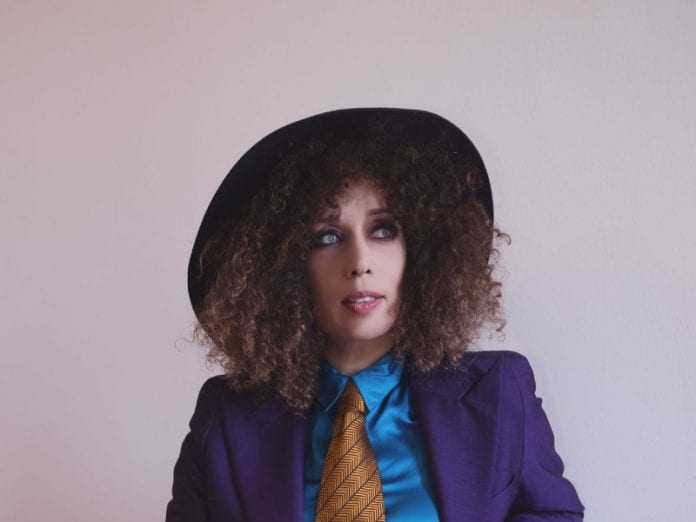 Not long ago, indie singer-songwriter and guitarist Kim Bingham release her new music video, “Sweet Irene: Escape from Lockdown,” a song lifted from her album, UP!

Originally titled simply “Sweet Irene,” Kim add “Escape from Lockdown” because of COVID-19’s impact on the making of the video, which utilizes 52 Instagram story filters and was directed by Jolyon White. As the video progressed it transformed into a short, madcap sci-fi episode.

The track features Gene Trautmann (drums), formerly of QOTSA and Jason Falkner of Beck and Jellyfish, along with engineering by Blind Melon’s Chris Thorn and mixing by Mathias Schneeberger of Masters of Reality, Burning Brides, and Kyuss.

Later, she changed the name from Mudgirl to The Kim Band, followed by touring Europe and the U.S. as guitarist and backing vocalist for Nelly Furtado. Kim then worked with Bran Van 3000 on two albums, Rosé and The Garden.

Since then, Kim composed the soundtrack for Canadian TV’s Les Invincibles, released her French-language mini-album Intermede, and followed with her full-length album, UP! Last year, she dropped “Beppe Green,” prior to going into lockdown with everyone else.

Kim is now back with “Sweet Irene: Escape from Lockdown.”

Guitar Girl Magazine caught up with Kim Bingham to find out where her head’s at, what inspired the visuals for “Sweet Irene,” and discover more about her guitars.

Besides food, water and sleep? My guitar, a pen, and paper.

Early this year, the video director Jolyon White and I had been working on another concept for a video involving a shoot with a group of people, then COVID hit and that project was shelved. During the lockdown, he contacted me with the idea of doing a video using only Instagram filters, and I had an old Halloween astronaut costume and a green screen, and so “Sweet Irene: Escape from Lockdown” the sci-fi story was born.

Usually, melody and lyrics come together for me. I’m humming and mumbling words then some line of lyrics comes out of my singing voice and it makes sense to me, pointing me in the direction of the next lines and melodies to write.

What do you want viewers to take away from the video?

I want people to feel like the video is a break in their day for a colorful, rock’n’roll space adventure. I also want viewers to know that you can be creative within the constraints of whatever situation, whether it’s physical constraints like lockdown or financial constraints. This is a no-budget video shot on an iPhone, but a lot of sweat did go into it from me and Jolyon.

Depends on the day! I’m lucky to have a number of guitars. I love playing my Gibson J45 acoustic and my Fender Thinline telecaster. Lately, I’ve been playing my Fender Jaguar a lot. The guitar that’s dearest to my heart is my black and white Explorer that’s signed by the New York Dolls.

I have a pretty much daily practice of plucking at my guitar strings for at least 20 minutes, sometimes with a plan in mind, sometimes with none. Something usually comes of those 20 minutes; they can turn into more minutes and more ideas, progress.

I formally got started in music when my friends in college asked me if I wanted to be a part of their ska band for our end-of-year school variety show because they needed a female singer for a ska song they wanted to cover. That band, Me Mom and Morgentaler, became one of the most popular live bands in Canada in the ’90s.  That’s where I really started in music.

For guitar, it was Carlos Alomar’s solo in David Bowie’s song “Stay” that I stopped me in my tracks and made me want to learn. Actually, I also loved Bowie’s choices of guitarists, from Mick Ronson to Robert Fripp. I’m a huge fan of great rhythm guitarists as much as lead guitarists. Among my favorite guitar players are Sister Rosetta, Neil Young, Kurt Cobain, John Lennon, RL Burnside, Nile Rodgers…

I used to go for a more crunchy sound, looking for a compressed slightly overdriven tone, but I’m tending to like a more warm clean tone with just a touch of distortion, concentrating on bringing the growl out of the note by how it’s played more than by the sound setting.

I can get lost down Words With Friends wormholes, it’s dangerous, like being in a casino with no clocks, you don’t feel the time fly by. But the game’s been a welcome distraction during the stress of lockdown this year.

When I imagine my life without making music, my heart sinks, life goes colorless and dark. I also have worked outside music, so I know what a special thing it is to be able to make and work in music. I can’t imagine my life without making music; it has thankfully come to me naturally, like a compulsion to make art from ideas that must be expressed in this rock song form with my voice and guitar.

I’m super excited about my new Patreon page, for those who want to know more about my process and ongoing projects, live streams; you can become a member of my community at Patreon. I’m also at work planning the next single and video (called “Charade”) that’ll be out in Spring 2021; and I’ll be in the studio recording more new songs soon. I like keeping the projects rolling!