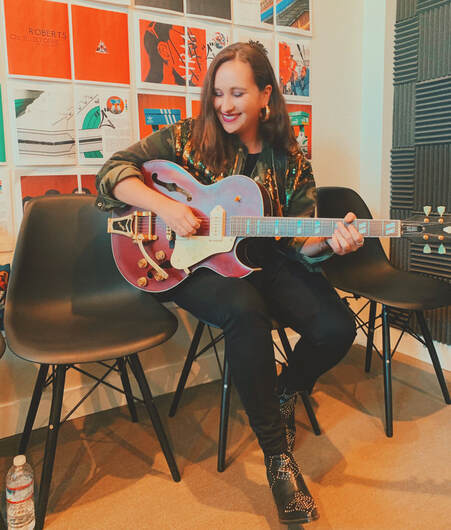 Explaining the song, Kylie shares, “When we’re kids, everyone tells us if we work hard and follow our dreams, we can achieve anything. I wrote ‘Too Late’ about the transition of getting older and realizing that you can get so close and put your heart and soul into something for 10-15 years, but still, never make the impact you dreamed you would. It’s definitely one of the most honest, heartbreaking songs I’ve written, but I didn’t want to run away from those fears because I think a lot of people share them.”

Kylie grew up immersed in music and began writing songs when she was 12-years-old, teaching herself to play guitar. Later, she attended the Berklee College of Music, followed by making the move to Nashville in 2012, where she established herself as a force to be reckoned with, followed by a publishing contract, syncs on ABC, NBC, MTV, and E! Network, along with being endorsed by Epiphone Guitars.

She participated in NBC’s The Voice as part of Team Alicia Keys, collected over 1 million streams, and recently appeared on season 2 of NBC’s Songland.

Guitar Girl Magazine spoke with Kylie Rothfield to find out about her influences, her guitar, her definition of tone, and her upcoming EP.

My family (especially including my crazy 8-year-old adopted pup, Yoda). My collection of guitars. And a good strong cup of tea.

That changes constantly, but my go-to is definitely “Waterloo,” by ABBA. It’s impossible to feel anything but happy when you hear that song!

How did you get started in music?  What’s the backstory there?

Apparently, I started singing really before I started talking! I always needed music to be playing in the background constantly, even at a young age, and all I wanted to do was perform for my friends and family. I wrote poetry that eventually turned into songs, I sang in choir, I taught myself guitar in my room and played all day.  It was really this lifelong passion that I didn’t know I would be able to pursue as a living until I decided to give it a real shot and apply to music colleges.

Which musicians/singers influenced you the most?

I have SO many influences honestly…the ones I grew up listening to that influenced me the most were probably Stevie Nicks, Don Henley, Donny Hathaway, Joni Mitchell, Bonnie Raitt, Susan Tedeschi…most recently, Lianne La Havas and The Alabama Shakes have been a couple of my biggest inspirations.

I tend to be drawn towards hollow-bodies the most. Probably partially because of my love of blues music. I also just love their warm, open tone and because I tend to be more of a rhythm guitarist, I appreciate that they have a strong low end and a depth to them.

I make music because I feel like it’s my purpose, as cheesy as that sounds. It’s the way I process emotions, it’s the way I connect to other human beings the most deeply, it allows an opportunity to be vulnerable and bring joy to other people.

What inspired your latest single, “Too Late?”

“Too Late” is about the difficulty of pursuing your dreams in a tough industry. I’ve been doing this full-time the past 10-years or so, and sometimes it just feels like being on a never-ending treadmill, always feeling “so close” to the end goal but not fully ever getting there. I remember when I was a kid, everyone told me to work hard and I could achieve anything. But now, all these years later, the fear starts to creep in that I haven’t made the impact I always dreamed I would. This song was tough to write because I really had to dig into those fears of inadequacy and failure.

For my artist project, I often find myself working with the melody first; it’s definitely what I’m most drawn to in music. I start on an instrument (usually guitar or piano), and sort of sing gibberish while fine-tuning a melody, and then words start to form and I start to conceptualize what the song is about. Or sometimes I’ll write lyrics down, almost like poetry, and days or even months or even YEARS later, I’ll come back to them and the melody is finally there. I try not to force creativity. I think the best songs tend to be written quickly, without over-thinking or over-analyzing.

How do you define tone? And has your tone changed over time or is it pretty much the same?

That’s a tough question! I think ‘tone’ is that almost indefinable quality that makes a singer unique. It’s the way they express themselves musically and emotionally and I’m not sure it’s something that can be “taught” exactly. I think I’ve always had what some people have called a “surprisingly soulful” tone. I think every time I’ve been through something in my life, my tone has gained a bit more depth. I think you can hear the heartbreak a bit better these days, especially as I’ve become more and more honest in my songwriting.

How have you been handling the coronavirus situation?

It’s been tough but I’m incredibly lucky to have gotten to collect some music grants and a bit of unemployment as a self-employed musician, so I don’t have to worry as much about all the canceled gigs at this time. I have a little recording setup and I’m self-producing or co-producing everything I put out these days, so, fortunately, the current situation hasn’t affected my ability to live and record too much. I try to take it day by day to alleviate anxiety and find small things to enjoy each moment. Instead of saying “I’m stuck in this tiny LA apartment every day,” I try to say “I’m SAFE in this LA apartment every day and lucky to have my health today and lucky to be making music still.”

You have a new EP releasing soon. What can you share about it?

This will be the first EP I’ve released in 8 years or so. I’m working with a new boutique label on this release, DVG Records, recently started by Lee Evans, and I’m co-producing all the tracks with Robert Stevenson (Jeff Beck, Johnny Depp). I’m really, really excited to be working with a lovely team of people on this project and I’m even more excited to share these songs with the world. After putting out mostly pop singles the past few years, this project has a bit more depth and heart and soul than previous projects. I hope people love it!