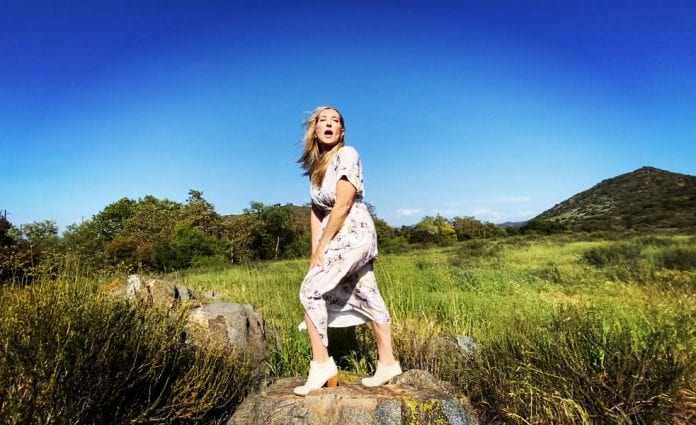 Explaining “Cleveland,” Tamar shares, “It’s a strange, bittersweet thing, but no matter where I live, I’m always going to feel a pull, a connection there. I still think about things that haunted me growing up.”

Directed by Tamar, the video places Super-8 home visuals alongside images of Tamar’s adult life in San Diego, imbuing the footage with depictions both enchanting and haunting.

Guitar Girl Magazine caught up with Tamar Berk to ask about “Cleveland’s” inspiration, how she got started in music, and her favorite guitar.

If we are talking about objects and not people, I would say, my record player and vinyl collection. My backyard, and either my guitar or piano.

Cleveland was a song I wrote a long, long time ago and lived as a four-track demo on my little TASCAM four-track player. When I was putting songs together for this album, I knew that I wanted to have some newly written songs and some older songs that I’ve always loved, but never released. When I listened back to ‘Cleveland,’ I was instantly brought back to some sad, melancholic moments in my life. Those feelings and memories still felt haunting and heavy. The song had a different chorus in the original demo…so I rewrote it…thinking about the original intention and where I am now.

The video was inspired by home movies. A long time ago, I digitized our Super 8 collection and when I got the DVD back, I was so overwhelmed with emotion to see the way I was as a child…so free and with so much openness to the world. I thought I would use some of that footage and juxtaposed footage of me today. I am still a very restless person…I yearn to feel more at ease and more at peace. The song is about my desire to feel free from things in our past.

I actually like both! It really depends. If I sit down with a guitar and write a riff, the rhythm of words sort of flow out.

If I write some lyrics in my notebook, the rhythm or feel of those lyrics might dictate the chords and rhythm of the song.

What do you hope your fans/listeners take away when they listen to your music?

“The restless dreams of youth” turned into a sort of love letter to myself. It was a very emotional journey and I realized that I’m still uneasy, and unsure and I might never be at peace with myself…and that’s okay. I hope that others feel the same and accept that some things might never be resolved.

I grew up playing piano and started writing songs on guitar when I was a teenager. My first proper band happened when I lived in Chicago. It was called Starball and was a power-pop band. You can still find some of those songs on Spotify! Then I started an electro-punk duo with my husband called The Countdown. You can find that stuff too! That band was all about Big Brother, Paranoia, and conspiracy theories! That band was a blast! I was also in a band with Kim Thompson called Sweet Heat. We put a single out on Kill Rock Stars and that was sort of a punk southern rock band. When I moved to Portland, I joined a band called The Pynnacles with the boys from Crackerbash and Satan’s Pilgrims. It was a true ‘60s garage rock band and I played the Farfisa! We gained a lot of popularity and put out two full-length albums…you can still buy those and find us on Spotify…haha! I also started another band called Paradise which released three full-length albums including a rock opera if you can believe it! I also guested on many albums (mostly organ and keys or vocals.) I’ve been playing/recording/performing for quite a long time!

OMG! Too many. Everything. Every song I’ve ever loved. BUT I’ll give a shortlist.

Liz Phair, Elliot Smith, ELO, The Cars, Thin Lizzy, The Who, Pink Floyd. Rolling Stones, The Beatles, and Joy Division. Also all the classic Disney movies….like from the ‘60s and ‘70s!

My daughter’s band is putting out their first album and they are amazing. I can’t wait for the world to hear them! The Fluorescents.

I really like this band that showed up on my Tamar Berk Spotify radio called The Boy with Perpetual Nervousness. I ordered their album on vinyl and love it. It’s very jangly pop with beautiful harmonies and catchy songs.

My favorite guitar is a 1971 Vintage Fender candy apple red music master. I bought it at a guitar show for super cheap! Back in the day, nobody wanted these vintage short-scale guitars. Today, the prices for these vintage guitars have become insane!

Do you use any special recording techniques in the studio?

I work in Pro Tools exclusively and try to be as organic as possible. One thing I like to do is just start by recording guitar, click track, and a vocal track for the verse and chorus. After I do that…I kind of live with that for a day or so….if I listen back to it after a few days and I don’t hate it, I pursue adding more instruments.

I like pop songs, so I have to say, I love Katy Perry! Entertainment would be TikTok or murder mystery documentaries!

Even as a little kid, I heard melodies in my head. I hear rhythms and hooks constantly. It might be an OCD thing, but honestly, I feel like if I can’t get those things out of my head, I might go crazy. Haha.

Looking ahead, what’s next?

I’m looking for some musicians to play with so I can do some live shows, but I am starting to write and record in earnest for another album. That’s what I love to do best.