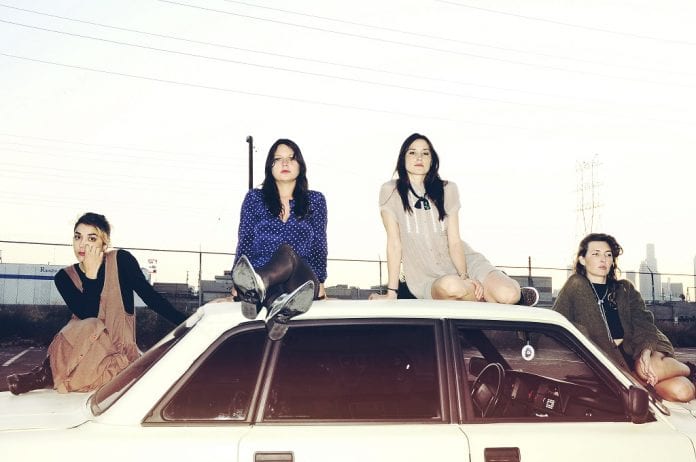 Warpaint has been carving the way for the current surge in psych bands since 2004 with their exquisite brand of dreamy psych indie pop. They made their mark with their EP Exquisite Corpse (2008) which was mixed by John Frusicante of the Red Hot Chili Peppers. The current band consists of founders Emily Kokal (vocals, guitar), Theresa Wayman (guitar, vocals) and Jenny Lee Lindberg (bass, vocals), and Stella Mozgawa (drums), who later joined the band in 2009.

Now with three full length albums and currently touring with Depeche Mode, I discussed the creative process behind their latest album Heads Up (2016) with guitarist Theresa Wayman. We also got to discuss what it’s like to be a female in the industry and how she balances motherhood with the touring life.

When did you first become interested in playing music?

What other instruments were you playing?

Bass and drums and just fiddling around playing with samplers and things like that. Basically, I was playing the guitar, but I wasn’t in any bands or anything. I was just kind of messing around with it with Emily sometimes, because we have been friends since we were 11. About 2003, I started playing a lot more, and we started our band in 2004.

Was that how Warpaint began with you and Emily jamming together?

Me and Emily were playing music a bit and then Jen and Shannon, her sister, were also both playing music and then we all decided to do a band together. We played on Valentine’s Day 2004 and it just clicked. So, then we became a band. Then we went through many incarnations of the band before we actually got signed in 2010 with Rough Trade.

What would you say your influences were musically growing up?

I have a pretty wide range of influences. The music that first made me want to start making music was Outkast and Bjork- those were huge influences. The electronic and trip-hop scene in the ‘90s I really resonated with that. When I was younger, my Dad listened to a lot of Bob Dylan and I got into that- I still to this day look to him for inspiration. I listened to a lot of Al Green when I was little, Talking Heads, Aretha Franklin- anything that has a soul.

Did your parents play instruments?

Yes, my Mom played piano and guitar, and my Dad played the guitar.

What current bands are your musical influences?

It’s all across the board. I’ve been listening to Kendrick a lot, Vince Staples, I love Little Dragon, LCD Soundsystem. I was just listening to Unknown Mortal Orchestra last night, they are incredible. 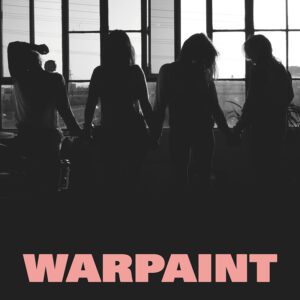 On your latest album Heads Up, how would you describe the sound of this album in comparison to your previous albums?

We wrote differently on this album in that we used to just all get together in a room and jam and come up with a song that might have two or three parts and decide what would be a good verse and chorus. We would sit together in a room and thrash it out over and over and try and come up with the best arrangement, and, of course, with four minds doing that it takes a long time because everybody has an opinion or wants to hear a version and we like to honor that with each other and try all the options. It’s not really fair if you don’t and that process takes a really long time.

So, this time because we had been touring so much and were kind of needing to be in our own spaces, we wrote a lot of songs in pairs or solo at home and then brought it to everybody in the studio, so the songs all developed from one or two minds originally and was expanded on by everybody else as opposed to coming from all of us originally. It was actually a faster process and it was better in the sense that we were all able to express our individual ideas more thoroughly. I got to hear an idea from start to finish which was very satisfying and everybody got that opportunity. I think that everybody felt a little bit more connected to the album in the sense that it made us all feel like we were really being heard.

Would you say that you would like to continue to write this way in the future?

Yes, I would like to continue to do it this way and I also think that it’s important for us to get together and just play and jam because that is also the quintessential Warpaint- that is what makes us who we are, too, and we don’t want to lose that.

Would you say that is one of your secrets to success as a band?

Yes, I think that is kind of a secret to our success in the sense that I appreciate when bands and artists are always reinventing themselves and I don’t understand why so many artists end up doing the same thing over and over again in their careers. Even people I respect I feel do that. Maybe it’s something I will understand when I’m 50 or 60 or something, but as of right now I don’t get that. I have different angles that I want to take in my direction and I never want to be pinned down to one genre or one expectation. What I think is so special about Warpaint is that we do write from four different minds and so the spectrum of what we are going to get as writers and what the audience is going to get as listeners is pretty broad and I think that’s really important and special.

Have you noticed any changes in the perceptions of women in rock music since you started out?

People are becoming more and more aware of the imbalance, but I don’t feel like things are really changing in a noticeable way that quickly. I think we are kind of inching along. There’s a lot of women that are singers and writers that write their own melodies and write their lyrics and they have a passion and that’s artistry in its own right and I don’t put that down at all. I just think that it’s kind of the standard. I like it when girls produce or engineer or play guitar or play instruments, drums in particular, when they play it really well like Stella, then that’s a standout.

You don’t see it that often but it is happening more. It’s kind of growing at a snail’s pace and maybe there will just be a moment where it all kind of shifts, but as of right now it’s just kind of inching along. I find it exciting though when I feel like there’s an open door to unexplored territory, I feel like girls out there should feel lucky because we have this whole world to explore that is open to us and the moment you set foot into it you feel like you are actually doing something of value in your life.

How do you balance motherhood with being a rockstar and touring? How has that changed you?

Well you realize that things that seem really impossible looking at them before they happen are actually possible and humans just kind of know how to deal and cope with what they have to do. It’s not easy leaving my son all the time, it’s really difficult and has been now for 11 years. I’m lucky because I have my mother and I have a support system, but it’s still not easy. In fact, it’s getting a little bit harder for him when I leave now he’s getting older. It’s a big changing time for him and he needs me even more. I basically have two lives- when I come home I’m with him and when I’m at work, I’m at work. I don’t really combine the two. I find it really hard to do that. For instance, one year he came to Coachella with me and my Mom was there, too. She was being very supportive and totally gave me freedom. She was telling me not to worry and that she would watch him, and I could do whatever I needed to do to get ready for the show, but still my mind was with them. I find it really hard to separate myself if he’s anywhere in the vicinity. I’m thinking about him and what he might need and how what I’m doing affects him and all that kind of stuff. So, I find it a lot easier to keep the two things separate. He often does not want to come to shows. He’s really proud of what I do, but I think the shows kind of freak him out a little bit, I don’t know why.

One of the reasons sadly is because he’s afraid that I’ll get hurt, because of what happened in Manchester at the Ariana Grande show and the shooting in Paris when Eagles of Death Metal played. I find it so interesting that in this day and age that is a legitimate concern and I sometimes think the same thing. I think it’s scary for him to see me on the big stage and I think it brings up all these emotions in him and he just wants to stay away. It’s really great though that I feel like I get so much inspiration from him and all the cliches about kids are true. They keep you young, they are fresh and have interesting thoughts, and are unhinged in the best purest way. That rubs off on me all the time and I love it. As hard and as stressful as it can be, I wouldn’t trade it in.

Tell me about the equipment you and your bandmates use and what do you like about them?

Emily and I both have 1966 Offset guitars, I use a Mustang and she uses a Jaguar and Jen uses a Rickenbacker from ‘75 or ‘74. The Mustang is really easy to play, the neck is small, the action is low, it just feels really great and I like that. It’s a relatively light guitar also as compared to a Les Paul which is so heavy. Emily uses a JT120 but she is wanting to move onto something with tubes instead of a solid state amp. I use a Vox AC30 with a top boost which is an important distinction. As a band, all of our favorite effects are a chorus, some kind of modulation, something that detunes. I really love detuning pitchy sounds. I use a Catalinbread Adineko pedal, it can go really extreme, but it can also act as a kind of minimal type of chorus. We like distortion and reverb, those are our main jams.