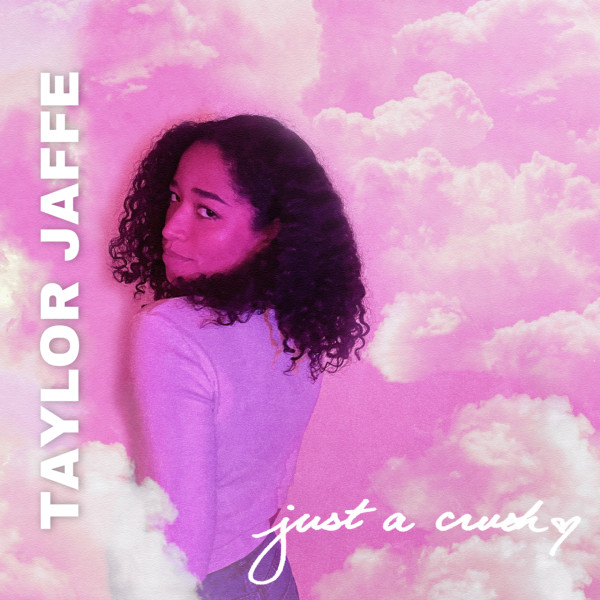 Talking about the song, Taylor shares, “I love a good crush as much as the next person, but there are some that are just not worth it and SO annoying to have. “Just a Crush” is about one of those for me; a dumb crush that I couldn’t explain. From writing the song in my bedroom to producing it during my Senior spring of college, this soft-pop style song has been my ‘let that man go’ anthem, because truly, what’s a crush to a Queen?”

“Just a Crush” glides on low-slung, gentle colors topped by Taylor’s lush, delicious voice, at once nuanced, chic, and oh so sumptuous.

Guitar Girl Magazine spoke with Taylor Jaffe to find out more about the person behind the music, her writing process, her definition of tone, and her upcoming EP, Free Fall.

What inspired your new single, “just a crush?”

“Just a Crush” came to me one night while I was home on a school break thinking about how annoyed I was at having a particularly dumb crush.  Some songs take months or years and tons of coincidence and serendipity to write, but this one came out in one go—I was coming to terms with the fact that I had an unwelcome crush, realizing that I wanted this person despite not actually wanting them, and ultimately deciding it would not be worth my time to pursue.

My love for music came from my dad; he’s always listening to music, and he dabbles in a bunch of instruments, mainly the piano and the banjo.  I used to love it when he’d play the piano just outside of my bedroom while I was falling asleep, so when I turned 6, I started taking piano lessons myself.  From there I was constantly writing lyric ideas down in random notebooks and recording song bits on recorders until I was about 11 when I began guitar and vocal lessons as well and could finally start writing full songs.

Which singers/musicians influenced you the most?

The most influential album for me is The Beatle’s White Album, I used to listen to it all the way through, every day for probably a little over a year or so when I was little.  I learned a lot about music, song composition, and musical artistry from the Beatles and from other rock and roll artists.  Other musicians that had a hold on me are Donna Summer, Rihanna, Beyoncé, The Doors, The Talking Heads, and Paul Simon to name a few.

Did your sound evolve naturally, or did you push it deliberately in a certain direction?

I think my sound has evolved naturally, but not without some deliberate intervention.  The songs I started off writing when I was 6 were totally capital “P” POP. Not that all of the songs from my childhood were bad or entirely embarrassing, but since I was between 6-12, they certainly lacked the benefit of experience and language.  Now that I’m 22, my sound has certainly evolved as I’ve gained more lived experiences, listened to more music, and developed more of a skill for storytelling and writing.  But there are also instances when I deliberately push my sound in new directions.  For example, this past year I’ve been writing a new album in which I’ve been working mostly on my phrasing and timing.  I’m trying to push this sound closer to a psychedelic rock meets singer/songwriter sound, and so far, I’ve been loving the results.

How do you keep your sound fresh?

I keep my sound fresh by listening to all kinds of music and constantly listening to new music.  I would categorize the songs I write primarily in the singer/songwriter, Pop, and Alternative Pop/Rock genres, but I think the fun thing about my music is that there’s no “sound” that I feel really bound to.  This allows me to hear new things and make a note of what I like and what I want to incorporate, either into my writing and performing process or my production process.  Producing my own music with such a broad catalog of music that I listen to for inspiration is also a huge advantage to keeping my sound fresh.

My writing process is ultimately my way of understanding myself, my relationships, and the world around me.  I don’t have one particular process, rather each song kind of develops in its own way.  I always keep a list of song ideas in my phone notes that include phrases I like, random thoughts, chord progressions, or musical stylings from another artist that I think would be fun to try.  When I’m starting a new song, sometimes I start off with something from this list, other times I’ll be messing around with some chords on the guitar or piano and end up singing to them, or sometimes I set out with a specific feeling or idea I want to write about, and I’ll free-write on it first to get some ideas going.  Some songs, like ‘Just a Crush,’ I’ll write in a few hours, others I’ll start and won’t come back to for months or even years.  I like this sort of free-form writing process, it makes my music feel a lot more like an art form and usually I find I learn something new through each song.

DOJA CAT IS EVERYTHING!!! I am fangirling Doja Cat so hard right now; her music is dynamic and fun, the world she’s created around it is exciting and new, and everything she’s doing just feels so cohesive and well planned.  Another big reason I’m such a Doja stan right now is that all of her music feels like it is written for HER.  I don’t hear her trying to fit into a certain mold to generate a certain amount of sales, rather her music seems to be born entirely of her creativity and in her own style, and I think that’s the most impressive part about it. Each song on her new album, Planet Her, is entirely different and I honestly just think she’s so cool, so I gotta stan Ms. Cat right now as an artist that I think is killing it.

You will be releasing your debut EP, Free Fall, soon. What can you share about the EP?

I’m so excited to be releasing this EP finally! As I mentioned before, I wrote a lot of these songs in 2019 and early 2020, and the first four songs on the album I produced during the Spring of my senior year at Colgate, so getting these out for people to listen to has been a long time coming.  The last song on the track is a mashup and cover of two Talking Heads songs, “This Must Be The Place” and “Road To Nowhere,” and I have to say that the addition of this song has brought the EP pretty full circle for me and feels like a great launching point into my next album that I hope to start producing soon.  Something fun about this EP is that the songs are all ordered chronologically, and because of that I think you really get a sense of the emotional growth that happened during this period of my life and my opening up to vulnerability and uncertainty, especially during the start of the pandemic. There’s definitely a little bit of nervousness in sharing this vulnerability, especially as the launch to my musical career, but I love all of these songs, I love their diversity, and I’m really proud of the work that I put into them.

What’s your definition of tone? And has your tone changed over time or remained the same?

I define tone as the timbre or quality of sound you infuse into the performance of your instrument.  My primary instrument is my voice, and I’m so glad my tone has changed over time.  I used to only like singing with my chest voice and I loved my big belting sound.  It was nice enough and it was fun, but it wasn’t well trained, and it was limiting in terms of the songs I would write and perform.  I attended St. Andrew’s School in Delaware for high school, during which I was a part of a class called ‘Choral Scholars,’ and we would meet twice a week to rehearse and perform at the school’s chapel services and at other Episcopal Churches in the Delaware, Maryland, and DC area.  In Choral Scholars, I started off as a Soprano I and really developed my high range and using my headspace. Because of my vocal range, however, by my senior year, I had sung every voice part from Soprano I to Tenor I to even out the numbers in our choir.  The amount of vocal control I learned during those 4 years was intense, sometimes uncomfortable, and overall leveled up my vocal skills at least tenfold.  I then took these skills to my a cappella group, The Swinging ‘Gates, at Colgate where I was a Soprano I again.  Since Colgate and thanks to Choral Scholars, my tone has evolved from this strictly belting sound to a more fluid, dreamy, and controlled sound.  I don’t shy away from high notes or riffs anymore, and I think ‘Just a Crush’ is a great example of this new sound.

I currently play a Yamaha acoustic/electric. I’ve had it since I started playing when I was around 11 or 12.  It’s a blue guitar with black and white accents and a few bumps and bruises too.  I also have a Fender electric guitar that I’ll record with sometimes, but so far, I’ve only performed with my Yamaha.

Are there any special recording techniques you use in the studio?

I can’t say I have any special studio recording techniques yet, since producing is still something I’m relatively new at.  Depending on the song and the tone I’m going for though, one technique I use for recording my vocals is to record early in the morning or late at night to get a little more of a gravelly and raw sound.  I also find that I’m more in tune with my emotions at either end of the day, so recording my vocals during these times also helps me to put more emotion into my vocal performance.  Another studio technique that I’ve been starting to play with more is doubling my vocals and instruments to create more texture in each song, that’s been fun so far.

What’s next for you musically?

Besides playing as many shows as I can to support the release of this single and my new EP, next up on my radar is producing and releasing my first album! This past winter I spent some time in LA with friends and working remotely, and it was really the first time I’ve ever had so much time to myself.  I grew a lot this year, processed a lot of emotions I’ve been putting off for a while, and wrote a lotttt of music to get through it all.  The album has two parts, and I’ve started to think about how I’ll be putting it all together, but I’m really excited to dig in soon!