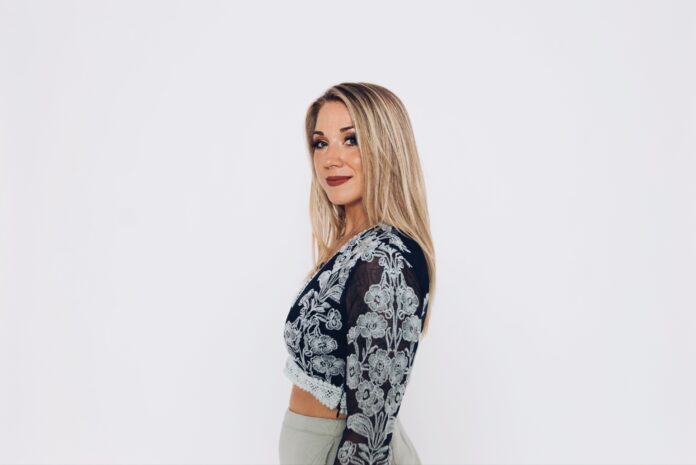 Alyssa Scott’s “Where Does It Go” begs the universal question we ask when we wake up one day with our first gray hair or celebrate fifty years of marriage. The singer-songwriter illustrates the fear of losing things that are intangible and irreplaceable while time slips through our fingers. The cinematic piano and orchestral accompaniment blend masterfully with Scott’s harmonies to create an awe-inspiring flow of raw emotion set to music. “The thing about time is that the moment matters,” the pre chorus warns, but the constant refrain is the question of where that time goes once it passes by. The single was written by Alyssa Scott, and produced by Joel Jorgensen. You can listen to “Where Does It Go” a day early, exclusively with Guitar Girl Magazine.

“I’ve always been one to reflect on different moments and feelings in life, but “Where Does It Go” came to me when I was reflecting on time and memories and it ended up pulling out some real emotion that I couldn’t help but write it and put it in song.” – Alyssa Scott

The “lines on my face, the gray in the hair” are physical reminders of the ever-ticking clock, and Scott is aware of how much has changed in her lifetime, but it doesn’t stop her from questioning what happens next. The singer’s reflection on her longtime dreams of being a “big, big star” are countered with the wise observation that “wine gets better but some things expire.” No time is ever perfect, but our perception of the world around us is a slippery thing that can’t be pinned down. Scott can’t resist admitting that “one day I’ll be wishing for that someday” and that the need to know the unknowable will always follow her. Scott makes us realize that we should all live in the moment, and try to experience our hopes, dreams, and relationships to the fullest in all moments of our lives.

Singer/songwriter Alyssa Scott is an independent country/pop artist that reflects dreamy vibes, storyteller lyrics, and a country/bohemian style. She moved to Minneapolis, MN, from Fargo, ND, where Alyssa received a degree in Vocal Performance from McNally Smith College of Music. After school, she has continued to pursue her career in music by fronting and touring with many bands such as Scarlet County, Skewed View, and Shirts ‘N’ Skins. While in Minneapolis, Alyssa also spent time recording with influences Sean Turner, and Phil Solem from the Rembrandts. Alyssa then received the opportunity to be a Burning Hills Singer in the Medora Musical in Medora, ND, which she pursued for two years.

She now resides in Nashville, TN where she continues to write, record, and perform as Alyssa Scott. She has performed on some of the top stages in Nashville, including having a weekly residency at Lucky Bastard Saloon. Alyssa has recorded with multiple Nashville producers Greg Strizek, Joel Jorgensen, and George Alexander showcasing her abilities in the studio. Scott won a round of Nashville Rising Song in 2019, and opened up for Chris Young in Fargo, ND in July of 2021.

She released her debut acoustic album called Ten Years in September of 2021, which was featured on highly esteemed playlists such as the Academy of Country Music’s New Music Friday playlist. In addition to her performances as a solo artist, Alyssa Scott is also a member of the all-female cross-genre group ElectraQueens. ElectraQueens (formerly known as The Highway Women) released their single “Walk Away” on May 6th, 2022, which was written by Tony Luke, Jr. and Joe Callari, and produced by Joe “The Butcher” Nicolo in Philadelphia, PA. The group has also collaborated with The Bacon Brothers (Kevin and Michael Bacon), on their single “Let Me Happen to You Girl” and a cover of “You Are Everything” with Kathy Sledge of “Sister Sledge” fame. The group has a tour planned for the fall and winter of 2022, and they will be releasing more original music in the coming months. ElectraQueens have been featured in Rolling Stone India, COWGIRL Magazine, and more.