LA-based Ronna Reason releases her new single “American Queen” from her upcoming self-titled debut EP due out March 19 on Damaged Disco. “American Queen” is the second single from the EP and tackles the topics of American materialism and celebrity obsession. The video was created by Laura Riboli and Energy Ghost.

“I wanted to write a song using questions that allude to social hierarchies with a critical eye on materialism and some of the confines of what society expects from women and claims to like about them. I wanted it to be a dance song and defiant about breaking out of that paradigm. The video uses ripped footage of all kinds of media that mostly doesn’t participate in that kind of criticality, except for the chorus. Those parts are meant to be like a video version of a vision board of sorts from the point of view of the American Queen archetype. The eagle footage is supposed to turn the materialism theme on its ear and also just point back to what we’ve been through in terms of our relationship to being in an America that at times is totally inspiring but also horrific, especially in terms of the last four years.” 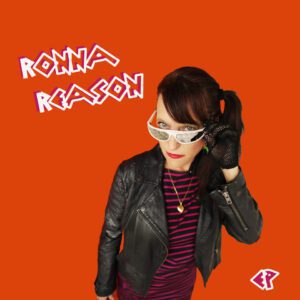 Ronna Reason originally sprang from Chicago’s vibrant ‘80s punk scene, gaining notoriety for her punky but groove-steady bass rhythms. Her post-punk feminist bands Joe For A Night and Ms 45 opened for Red Hot Chili Peppers, Faith No More, Iggy Pop, and more after turning down an offer to join the Smashing Pumpkins.