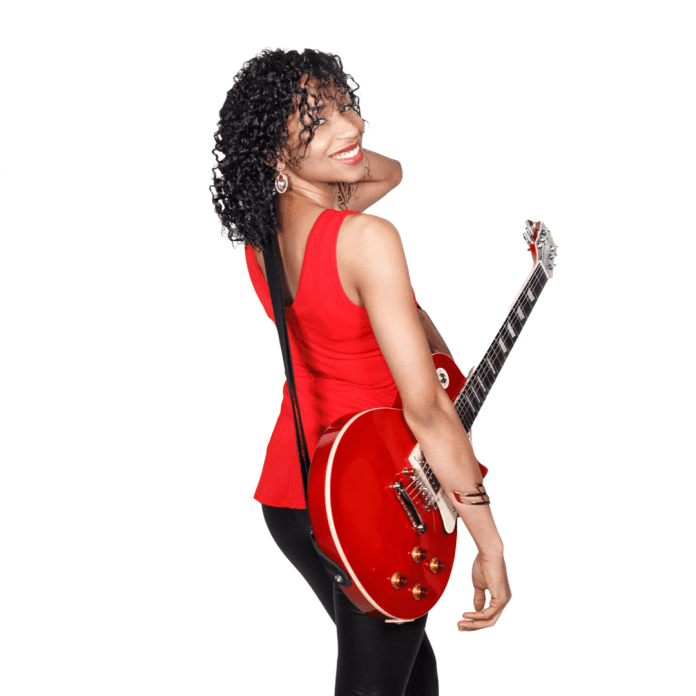 Guitar Girl Magazine’s Diversity Editor, Gabriella “Guitar Gabby” Logan, sat down with some of her industry sisters to celebrate the cultural influence of Black history in music. This series highlights the amazing womxn that continue carrying the torch while using their platforms and music to spread positivity in a changing world.

What’s your name and pronouns, where are you from, and what instrument do you play?

My name is Alïah Guerra she/her; I’m from Montreal, Quebec, Canada. I play the electric guitar, sing, and produce my own music. I am a DJ at  Concordia University’s CJLO radio, where I host a weekly show, and where I am currently studying. I’ve also recently created my own app to exclusively connect with my fans, other creatives, and entrepreneurs around the world.

How long have you been playing, and when did you know you wanted to be a musician?

I come from a very musical family. I always had music class growing up in school. When I started high school at about twelve years old, we moved to the suburbs. I didn’t have many friends at the time, so I spent a lot of time listening to the same 300 songs on my iPod shuffle and playing my grandpa’s old classical guitar. I fell in love with Jazz and Amy Winehouse and taught myself how to play her tunes on the guitar by ear. My mom saw how quickly I was developing and bought me my first electric guitar. From there, I started writing my own songs, and I realized out of every instrument I had played growing up, the guitar was the one that I connected with most, and it’s been my instrument ever since.

What is the best part about being a musician?

What do you think of when you hear “Black History Month”?

When I think of Black History Month, I think of a month to unapologetically celebrate Black excellence since the beginning of time and acknowledging the rich Black history highlights that have not been taught in school or depicted on TV and in movies.

Is there a specific Black creative that inspires you? Why?

J Dilla inspires me because when I listen to his instrumentals, his music allows me to tap into this creative sweet spot where I can just flow out ideas either while writing, singing, or playing guitar every time. J Dilla has always been a quick remedy to my creative blocks.

Why do you think it is important to pay homage to the Black creatives that came before us?

I think it’s important to pay homage to Black creatives that came before us because most of the time, they didn’t get their shine while they were up-and-coming, or their creations were stolen from them and passed off as someone else’s—which is all too common throughout history.

Why do you think the world needs to learn about our Black History?

I think the world needs to learn about Black history because Black people are the original people. Human life originated from a black woman in Africa; we should all want to learn our history.

What is your current studio and (when we get back to live shows) live performance set up? Is it any different?

My current home studio setup is simple just like on stage.  I currently record on MixCraft 9 (DAW), with a 2 port Behringer interface and the Neewer-700 condenser microphone, and plug in my Mee earbuds. On stage, I use my Fender amplifier for my red JT-220D electric guitar, then hook up my Shure Sm58-LC Mic to my Anleon S2 in-ear monitor system.

What does it mean to be a Black womxn to you?

Being a Black Womxn means to be divine, beautiful, creative, and wise, one who can defy the odds and achieve greatness.

What’s one piece of advice you would give to your eight-year-old self looking up to the adult version of you?