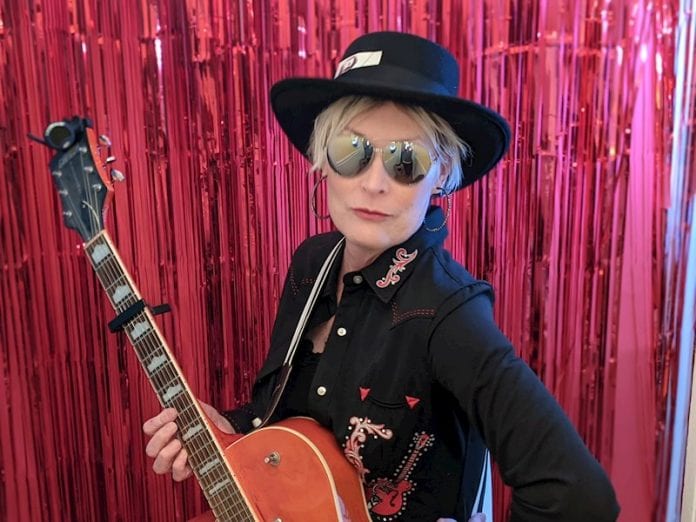 Talking about the song’s genesis, Virago shares, “I’d been a little depressed from the non-stop level of hate aimed at trans people and needed to write something that gave me some hope and comfort. I needed something to supercharge my resilience. ‘High Road No. 6’ is that song, about escaping the entrapments and negative forces wanting to take you down. It’s a visual and cinematic song, plus you can shine up your boots and break out some the line-dancing.”

Since the ‘90s, Shawna Virago has been blending folk and punk elements into delicious, visceral songs narrating queer love, surviving another day in this crazy world, and sticking up for the underdog. Unafraid and unapologetic, she was one of the first openly transgender women to perform and tour across the U.S.

Her distinctive music and her bigger-than-life personality have been featured in Bitch, Louder Than War, No Depression, Paste Magazine, on NPR and PBS, and on left-of-the-dial radio.

Selected as one of Shewired’s “Top 25 Hot Femmes,” Virago is multi-talented: Artistic Director of the San Francisco Transgender Film Festival and a filmmaker; she’s a published writer, and has composed soundscores for Sean Dorsey.

Written by Shawna Virago, who plays guitar and bass, along with Lien Bao Do on drums, “High Road No. 6” was recorded and mixed by Grace Coleman at El Studio in San Francisco, California.

“I was broke and living in a haze / From my station in life / Trouble started when I slept with the mayor / Then the mayor’s wife / Next time I won’t fall for the line / ‘Trust me I love you for your mind.’”

The video, directed by Shawna Virago and edited by Eric Garcia, was shot by Sean Dorsey and depicts Shawna dressed in a stylish plaid outfit accompanied by her guitar and fashion-forward gay cowboys.