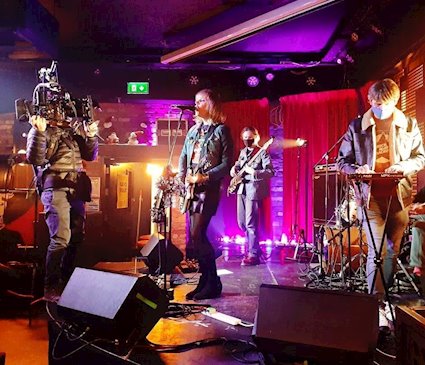 Irish psychedelic indie-pop outfit Keeley presents ‘Never Here Always There’ in the lead-up to their debut ‘Brave Warrior’ EP, out June 18 digitally with a physical release planned for autumn.

The ‘Brave Warrior’ EP is being released via Dimple Discs, a London-based label with deep Irish music connections, having been founded in 2018 by The Undertones’ Damian O’Neill and Brian O’Neill. Initially as a vehicle for Damian’s solo projects. It has now grown to encompass such artists as The Undertones, Cathal Coughlan (The Fatima Mansions, Microdisney), Kev Hopper, Eileen Gogan, Dragon Welding, Nick Haeffner and Baby Shakes with forthcoming archive material from Microdisney and Fatima Mansions.

‘Brave Warrior’ demonstrates the multi-faceted songwriting smarts of one of Ireland’s most talked-about emerging bands, from this upbeat lead track to more spacey, darkly-dreamy electronic offerings, drenched in drama and soaked in sadness. This 4-track collection was produced and engineered by Alan Maguire, who mixed it together with Keeley, and mastered by Anthony Chapman (Franz Ferdinand, DEVO, Cathal Coughlan, Jesus Jones, Wolfhounds).

For the past five years, frontwoman Keeley has been publishing ‘The Keeley Chronicles’, a popular blot documenting the many facets of this unique, harrowing and mystifying case, correcting the falsely published details of Inga’s life and piecing together what really happened in her final days. Working closely with Northern Irish police, senior politicians and Inga’s legal representatives in Northern Ireland in concerted efforts to advance and resolve this notorious case, she is keeping the memory of this beautiful and mysterious soul alive.

“Inga is the subject of everything I write. From the moment I first read about her exactly five years ago now, her cause became a burning obsession for me. Since that day I haven’t written a song about anyone or anything else…  I consider myself a concept artist and my purpose is to give Inga a voice,” says Keeley.

Earlier, Keeley previewed lead track ‘The Glitter and the Glue’ – a blistering buffet of psychedelic rock, post-punk and the fuzzier, more frantic end of the dreampop spectrum – and the single ‘Last Words’, topping Newstalk FM’s airplay chart, getting playlisted by RTE Radio 1 and 8Radio, and attracting support from radio in multiple countries. Picked by legendary broadcaster Tom Dunne as one of his ‘Top Tracks of 2020’, it was listed at #12 in Radio Nova’s ‘Top 15 Irish Songs of 2020’. Keeley also enjoyed full-page articles in the Belfast Telegraph and Derry Post, an unheard-of feat for an indie artist on their debut single.

Keeley is already recording their next LP at Darklands Audio in Dublin, where Fontaines D.C. also recorded their first album. As of June 18, ‘Brave Warrior’ will be available everywhere online, including Spotify and Bandcamp, where the lead track ‘Glitter and The Glue’ is already being offered for immediate download with any order.